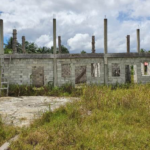 Condition of work on the Community Center / ICT Hub in 2019

Kaieteur News – Labor Minister Joseph Hamilton has revealed that a $ 3.4 million West Watooka Pavilion / Community Center / Information and Communication Technology (ICT) Hub located in Region 10 (Upper Demerara-Berbice) has left despite money is already being injected into the project.
Minister Hamilton made the disclosure to Kaieteur News, following his visit to the Region last week. During that visit, he visited that site and many others.
The project was one of several community development projects under the Sustainable Livelihoods and Entrepreneurial Development (SLED) program in 2019. In April 2019, former Finance Minister Winston Jordan committed to provide the $ 3.4 million for the pavilion to be completed. and Former Minister of Public Telecommunications Catherine Hughes also joined in, pledging to set up an ICT Hub in the West Watooka community.
This was after residents had pleaded for assistance for the completion of the facility they had already started to build through self-help, and, at the time, the foundation was already complete.
Of the $ 3.4 million, a provisional payment of $ 1.4 million was made toward the project on July 30, 2019. The remainder of the amount was not reported as collected.
Documents viewed by this newspaper listed the project coordinator and contact person for the project as Teerissa Millo, however, no contact was named.
A status report on December 12, 2019, stated that the beams were being erected at the time and that the roof had not yet been built. The images provided in the status report showed the work done, but a recent image seen by this newspaper showed that the building was left without a roof built. Adding to that, the area is overgrown.
Kaieteur News understands that a total of $ 6 million was donated to a group for the construction of the community center and the ICT hub, however, the documents only distributed the $ 3.4 million for the project ‘ n support it.
The SLED program was started in 2015 under the previous coalition government and, according to Minister Hamilton, some $ 760 million has been invested in the program to date. A special audit of the projects classified under the 2019 program has already begun and another report is due from the Audit Office.