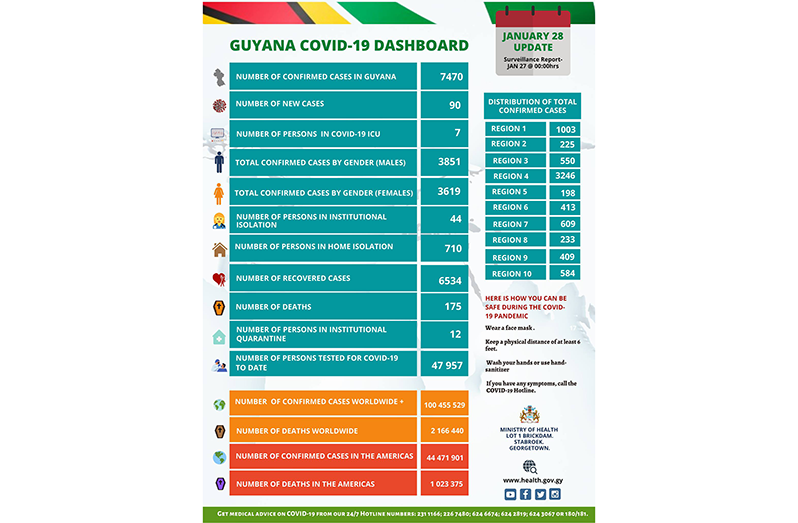 Following the recovery of the additional 46 people, the total number of people who have improved since March is now 6, 6534.
There are currently 773 active cases, seven of which are housed in the COVID-19 Intensive Care Unit (ICU) at the National Infectious Diseases Hospital in Liliendaal, Greater Georgetown.
Currently, there are 44 separate people institutionalized; 710 are alone in the home and 12 are in institutional quarantine. Many people infected with the virus are said to be disproportionate, that is, they do not exhibit symptoms.

Health Minister Dr. Frank Anthony, said during his COVID-19 update with the Department of Public Information (DPI) on Thursday that several inmates at various prisons and four prison officials in New Amsterdam tested positive for the virus.
The minister noted that 33 prisoners were infected with the coronavirus at Timehri Prison, one in New Amsterdam Prison and a few in Lusignan Prison.
Minister Anthony added that the four prison officers have been separated from their homes where they will stay for several days until they are cleared by health authorities.
Meanwhile, the prisoners are isolated in different parts of the prisons so that they do not infect the rest of the prison population.
“We have the prison services medical staff who monitor them and most of them are disproportionate; once they go through that 10-day period, they will be released, ”said Dr. Anthony.

In the meantime, the updated COVID-19 Emergency Measures are in force between January 1, 2021 and January 31, 2021. They may be extended or amended by notice of the Minister of Health, after an assessment of the general public health conditions of the pandemic.
Under current measures, however, everyone is required to wear face masks when leaving their homes. Adequate physical distance and cleanliness are also important. The current curfew time is 22:30h to 04:00h. People with COVID-19 symptoms are asked to call the COVID-19 helpline numbers: 231-1166; 226-7480; or 180/181 for assistance.