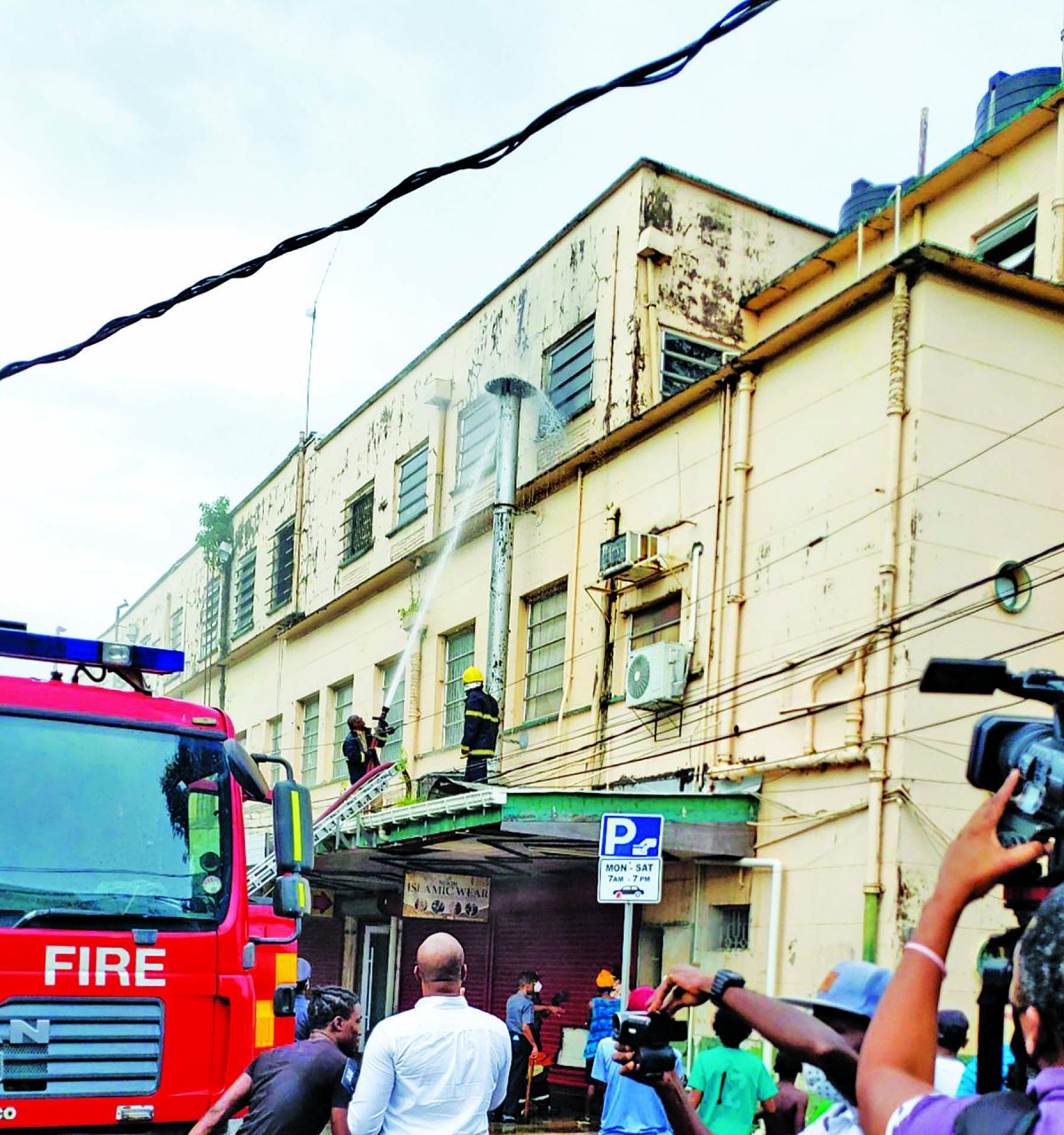 A major disaster was averted Friday morning after firefighters included and extinguished a kitchen fire in the cafeteria of William Fogarty’s Ltd building in Georgetown.
Heavy smoke was seen flowing from the rear of the building on Kirk Patrick Street (between Robb Street and North Road) sometime around 09:30h and an alarm was raised immediately. The building, which houses a number of businesses on its ground floor, was quickly evacuated.

Chief Fire Officer Marlon Gentle told reporters at the scene that the Fire Service had received several calls around 09: 32h regarding smoke emanating from the premises. Fire tenders were sent from Central Fire Station at Stabroek, Alberttown Fire Station and West Ruimveldt Fire Station along with the newly acquired Fire Boats.
“When they got here, they encountered heavy smoke conditions on the ground floor with smoke creeping into the upper floors. We were able to go into rapid attack mode and find the fire somewhere in the kitchen. The fire was already spreading through the ceiling and entering the business area of ​​the store. Crews were able to isolate, attack and prevent the fire, ”said the Fire Chief.

After the fire was extinguished, fire service investigators searched the kitchen area where it started. During the preliminary investigations, they discovered that a faulty extraction fan in the kitchen of Rose Bud Café on the ground floor caused a fire on Friday.
“Something went wrong in the kitchen but I don’t think it’s a cooking machine. We think he’s an electrical fan – one of these extraction fans, ”Gentle revealed while updating the media on the fire.
However, the Head of Fire praised the efforts of the firefighters to tackle the fire. He also expressed appreciation to Guyana Police for assisting the Fire Service.

When Guyana Times arrived at the scene, firefighters were seen pouring water down the extractor fan pipe / tunnel to extinguish the fire.
Eventually, they gained access to the building and were able to contain the inferno.
In addition, the firefighters had to ventilate the building to ensure there were no other pockets of fire and to clear the heavy pockets of smoke. However, by mid-afternoon, business executives were allowed to rejoin the building.

Damage / losses
Although the extent of the damages from inside the building is unknown, Guyana Times understands that at least one clothing store attached to the building on Kirk Patrick Street – Noor Islamic Wear – has suffered extensive damages.
The owner, Fauzia Noor, told this publication that the store was closed at the time of the fire and up to about 10:00h had been notified.
The woman, who has been operating the clothing and accessory shop there for almost three years now, said that by the time she arrived at the scene, the fire had already been extinguished.
Noor contacted that many of the items in the store were destroyed by the fire and there was extensive water damage as well.
This announcement was informed that at least two other booths from the rear of the building were also destroyed in the fire. However, they were empty at the time. Firefighters had broken into the entrance of the vacant store to gain access to the rear of the building from Kirk Patrick Street.
Meanwhile, another owner, who runs a children’s store in the Fogarty building, told this newspaper that the only damage to his shop, like many others, was the heavy smoke that filled the air and contaminated items in the shop.
Meanwhile, the Head of Fire told reporters that the only challenge the fire service faced, specifically the tenders from Central Station, was to navigate through the Stabroek congestion area to reach the scene. He said it took firefighters eight minutes from the station to the Fogarty building which is about two blocks away. (G8)