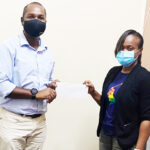 Kaieteur News- The owner of Broadway Hotel has urged more private sector organizations and companies to support the FIFA Golden Jaguars World Cup campaign, as the hotel makes a financial contribution to the squad’s preparations for its first qualification matches set for March .
Broadway Hotel, located on Broad Street in Georgetown, joins a growing number of private sector partners like Banks DIH and Muneshwers who are coming aboard the ship in support of the Golden
Jaguars as they prepare for the start of their World Cup campaign.
“The Guyana Golden Jaguars are preparing for a very tough 2022 World Cup qualification campaign. I believe we all have a responsibility to help them in every way we can and I am personally proud to support the nation’s team, ”said Broadway Hotel Managing

Director Alepemo Peters.
“I would like to encourage other corporate entities to support our Gold Jaguars in their bid to qualify for the FIFA 2022. World Cup.”
The donation was made by Broadway Hotel General Manager Junica Pluck and accepted by Guyana Football Federation President Wayne Forde.
“On behalf of the players, staff and GFF, I would like to thank the Broadway Hotel for supporting our national team at this exciting time,” said Forde. “The qualification process for the FIFA World Cup requires a huge allocation of resources and cannot be managed without the help, commitment and generosity of our private sector partners.”
“We are, therefore, grateful for such timely contribution, which will help us prepare the team in the best possible way for its World Cup tour after such a long layoff due to the pandemic.
We hope that many other partners will also join us to join us on this amazing journey as the nation as a whole retreats from this year’s Golden Jaguars. ”
Domestic players currently train five days a week in GFF National Training
Center, under the supervision of Head Coach Marcio Maximo, as the squad tries to build fitness and sharpness ahead of its first World Cup match against Trinidad and Tobago on March 25th.
“If this contribution helps a young player move one step closer to realizing his dream of representing the Golden Arrowhead – then this would be a huge source of satisfaction for the managers of the Broadway Hotel,” said Peters.
Banks DIH has offered water and energy drinks and Muneshwers has provided health and
sanitary equipment to support the preparation of the Golden Jaguars at National Training
Center.