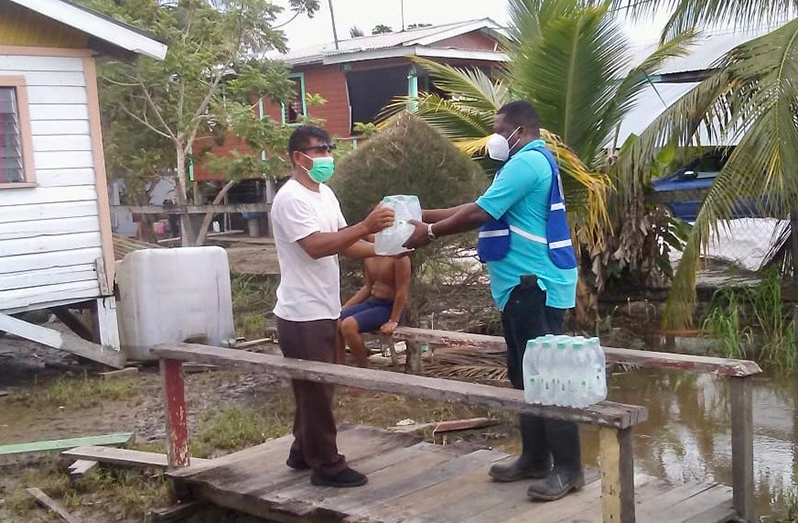 Hundreds of households in the Charity squat area and Upper and Lower Pomeroon River on Wednesday received hampers and sanitary products from the Civil Defense Commission (CDC). Heavy rainfall has caused flooding in many parts of Region Two (Pomeroon-Supenaam). Some areas were more affected than others. The CDC’s visit came a day after Prime Minister Mark Phillips and Agriculture Minister Zulfikar Mustapha visited several of the flood-affected areas and took note of the concerns of affected residents

During the visit, both ministers promised residents that relief supplies would be distributed promptly. Early Wednesday morning residents started lining up to get their hampers. Captain Salim Autumn Readiness and Response Manager, who led the distribution exercise, said 180 charitable residents and more than 100 more communities in the Pomeroon River had benefited. Captain October informed this newspaper that drinking water and food supplies were given to the families. In addition to the exercise, a team in the area is also conducting a further assessment and based on the findings, residents will be given more relief.

The People’s Progressive Party (PPP / C) Civic Councilor, Councilor Faraz Baksh, said a list of affected residents had been submitted to the regional administration. He said those individuals were contacted about the distribution and convened to collect their supplies. Baksh said he was happy that assistance had been provided to the residents. Monique Edwards, a mother of seven, is one of the recipients of hampers. Although she expressed gratitude, she called for medical outreach to be conducted in the area.

Edwards said too many people in the Charity Squat Area have toilets that cause serious health problems. The woman told this publication on Tuesday that her children were sick and vomiting.

Another Mervin John resident also said he was happy for the help. John, a father of nine, said he had been unemployed because of the COVID-19 pandemic and started a kitchen garden as a way of providing for his family. He said because of the flood, he was now desperate because his garden was overflowing. Meanwhile, the region’s drainage and irrigation (D&I) workers are currently moving the pump at Windsor Castle. It will be transported to Charity to help drain the flood water that has been standing for several days. The Guyana Chronicle has been told that this process can take a day. According to Regional Vice Chairman Humace Odit, the pump is expected to be installed by noon on Thursday. Once in place, he said the floods are expected to be alleviated. Some parts of Charity have been underwater since Boxing Day.