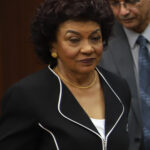 Kaieteur News – Chairman of the Guyana Elections Commission (GECOM), Justice (ret’d) Claudette Singh has refuted allegations from opposition-nominated Commissioners Vincent Alexander, Charles Corbin and Desmond Trotman, where he claimed Singh had refused to meet with and Delegation National People’s Congress (PNC), on the basis that it has been “unprecedented”.

In a press release last night, the Chairman recalled that on January 7, PNC Secretary General Amna Ally had written to her requesting “you individually engage as Chair of the Commission to put forward our proposals of the issues involved. before participating in the Commission Meeting. ”

Singh notes that she responded in her response, also dated January 7, to invite the team to meet the Commission on January 12 at 2PM. “In a separate communication on the same day,” the Chairman adds, “I also asked that many of the issues likely to be raised are matters that the Commission will address, and a recommendation that send proposals in writing so that they can be sent to Commissioners for examination and consideration before the meeting. “

Later on January 11, in her response, Ally repeated her request to meet individually with the Chair, to discuss voter registration issues. Singh went on to say that the GS further stated that “It is public knowledge that you have facilitated meetings with other foreign and domestic stakeholders without major formalities …” He specifically chose that a meeting with the full Commission can be held after a meeting with the PNCR.

However, the Chair states that she advised Ally further on January 12, 2021, prior to the Commission’s meeting, of her insistence that the team should meet the “full Commission as is customary in meeting Political Parties”. He further explained that this methodology had been useful in ensuring that all Commissioners collectively benefit from the issues that should be addressed for later consideration and decision.

“The allegation made by Commissioners Alexander, Corbin and Trotman that I refused to meet because such an unprecedented meeting is at least very misleading. As Chairman of GECOM, I have never engaged with any political party on my own. Proposals made by stakeholders are always welcomed and being heard by the full Commission allows for more meaningful engagement at that level, ”the Chairman expressed.

However, as Chair continued, he reiterates that it is appropriate to engage with political parties at Commission level so that their concerns can be discussed and, where necessary, action taken. “For these very reasons, I invited Ms Ally to meet the Commission as a whole as I would with any other political party expressing a desire to meet with me individually,” the Chair concluded in her statement.