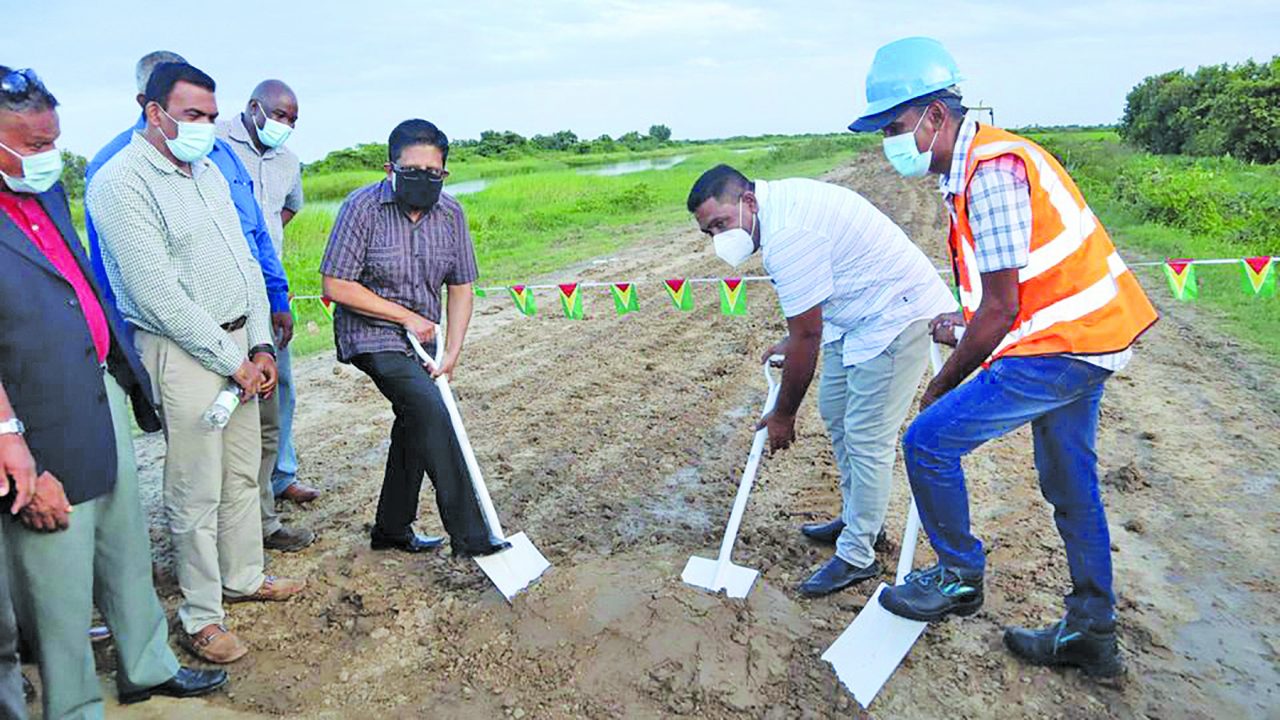 To commemorate the start of the $ 327 million farm-to-market road in Onverwagt, West Coast Berbice, Region Five (Mahaica-Berbice), a turf turning ceremony was held on Saturday.
The ceremony was attended by Agriculture Minister Zulfikar Mustapha, Finance Minister Dr Ashni Singh, contractor and officials of the National Drainage and Irrigation Authority (NDIA) among others.
The project was awarded through the NDIA to a Region Five contractor, who is also a farmer. The successful bidder, Romel Jagroop of Romel Jagroop Construction Services, has been tasked with completing the 5km asphalt concrete concrete road.
The Agriculture Minister was pleased that his Government was delivering on its campaign manifesto promises.
Minister Mustapha said it was important to invest in infrastructure for the benefit of the agriculture sector and farmers. He further said that this is one of the three farm-to-market roads that will be built in Region Five.
The Minister added that the completion of this route will cause reductions in the cost of production and the length of travel for farmers to their lands and markets. With regard to machinery, the Minister noted that farmers can now expect less expense on their equipment as it will cross the solid asphalt concrete road.
According to Mustapha, 30,000 acres of rice can now be planted as access will become easier for the lands.
The contractor, Jagroop, indicated in his brief remarks at the ceremony that he was pleased to be involved in the project and that he intended to complete the road in accordance with the Ministry’s specifications.
He estimated that the project will be completed in eight months. Engineers from the National Drainage and Irrigation Authority (NDIA) will oversee the project.
However, the Minister also urged residents to contact NDIA officials to monitor the project to ensure value for money invested in the project.
Mustapha, meanwhile, added that when he took office in August 2020, he was bombarded with complaints from residents of the Mahaica-Mahaicony and Abary (MMA) Plan ranging from frustrated canals to impossible dams. To remedy this, he had asked the emergency fund to start work.