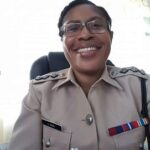 Kaieteur News – Yesterday the Deputy Commander and Assistant Superintendent of Guyana Police (GPF) was charged with forgery of over $ 1 million in meal payment for riotous ranks.

Deputy Commander 4B, Lorraine Saul, and Officer in Charge of the Police Finance Department (ag.), Assistant Superintendent Kurt Smith were officially charged yesterday with fraud. Smith appeared at Georgetown Magistrates’ Courts before Chief Magistrate Ann McLennan. However, Saul is said to be on vacation and currently out of the jurisdiction. He did not appear in court.
Saul and Smith were slapped with two joint conspiracy to commit felony charges, and Saul was charged an additional two counts of forgery of accounts.
The first charge alleged that between Dec. 18, 2020 and Dec. 28, 2020, in Georgetown, while being officers of the GPF, Saul and Smith conspired with each other and other individuals to forge a $ 1,350,000 payment to show that meals will be supplied to the ranks of the Riot Unit training from December 1, 2020 to December 15, 2020.
The second charge alleged that the duo, from Dec. 18, 2020 to Dec. 28, 2020, were in Georgetown, despite being GPF officials, they conspired with each other and others to coax the $ 465,000 payment to show that meals be delivered to ranks working at Georgetown Prison between December 1, 2020 and December 15, 2020.

Attorney-at-Law Mark Waldron represented Smith. Waldron told the court that his client was unaware of what he was signing but that, according to another rank, he was brought in to sign.
However, the Special Organized Crime Unit (SOCU) Prosecutor, Patrice Henry, told the court that Smith had been charged because although he was an Assistant Superintendent and acted as the officer in charge of the Police Finance Department, he had to for the amount of money to be approved first before approval.
Smith was not required to plead to the indictable charges and Chief Magistrate McLennan granted him $ 100,000 bail on each charge. The matter was adjourned until May 14, 2021.
According to police, Saul was the officer in charge of Brickdam Police Station’s Other Range Message before she was evacuated. The Mess provides breakfast, lunch, and supper to ranks located at various stations and locations in Division 4A.
According to the facts of the allegations, between December 1, 2020 and December 15, 2020, Saul allegedly swiped several accounts for meals provided by Mess for reimbursement at the Police Finance Department.
Apparently, Saul prepared an account dated December 18, 2020 and a minor contract dated December 18, 2020, for meals allegedly supplied to ranks performing duties in Section ‘A’ Terrorist Unit Training between December 1, 2020 and December 15, 2020 up to the amount of $ 1,350,000 when no such training was done for that period.
She is also alleged to have prepared another account and a small contract with the same dates for meals supplied to ranks performing fixed-point duties at Georgetown Prison, between December 1, 2020 and December 15, 2020 in the amount of $ 648,000 . On that account, Saul inflated the number of ranks and the number of meals in the amount of $ 465,000.
Smith was charged with allegedly conspiring with Saul to defraud and authorize the charges when there was no training for the period mentioned on the count, therefore, no feeding the ranks at Georgetown Prison for the same period.
The matter was reported and an investigation was launched by SOCU. Smith and Saul were subsequently charged.
Meanwhile, on March 26, 2021 former Assistant Commissioner of Police Kevin Adonis of 95 Stewartville, Demerara West Bank, and three other members of the GPF, made their first court appearance after being slapped with a $ fraud charge 19M.
Also charged: Rawle Haynes of Hydronie, East Bank Essequibo; Jermaine Fraser of 4116 Phase One West Minster, Westmeath Demerara, and Michael Corbin of 315 First Avenue, La Parfaite Harmonie, West Bank Demerara. All four men appeared at Georgetown Magistrates’ Courts.
Fraser, Haynes, Corbin, and Adonis were slapped with a joint charge, while Corbin and Haynes were slapped with individual charges. They were not required to plead to the indictable charges after they had been read to them.
According to the facts of the allegation, the missing $ 19,030,767 was allocated to officers who were performing additional duties. However, there are documents that show that those officers signed and received the money, but it was later revealed that the officers had never received the money.
The matter was reported and an investigation launched. The four men were subsequently charged.
Corbin was placed on $ 250,000 bail, Haynes was set on $ 200,000 bail, while Adonis and Fraser were set on $ 150,000 bail each. Yesterday the men made their second appearance in court.
Corbin and Fraser were also reported last year to have been slapped with 21 fraud charges, totaling $ 11,385,000. They had appeared before Chief Magistrate Faith McGusty in Georgetown Magistrates’ Courts and were set on $ 250,000 bail each.
The duo alleged that on April 4, 2019, Eve Leary, Georgetown, while being employed as a clerk or servant in the GPF Finance Office, with intent to defraud, they knowingly made false entries in their employer’s accounts .