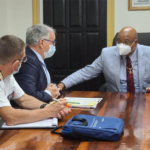 Kaieteur News – The French Government has expressed its interest in building the Corentyne River bridge for Guyana.
The Corentyne River bridge is part of the government’s plan to link Guyana with neighboring Suriname.
Meeting with the Minister of Public Works, Bishop Juan Edghill, on Monday, was the French Public Ambassador to Guyana, Antoine Joly and his team.
Joly was accompanied by Jean-Francois Gerin, Mr Christophe Sureau, Mrs. Christine Sureau, Mr Yorgo Hernandez and Mr. Philippe Lamouret.
According to a statement from the Ministry of Public Works, Joly shared an interest in maintaining Guyana ships and building the Corentyne River bridge.
The Minister for Public Works told Kaieteur News that the French Government has not disclosed details of its interest – whether they want to fund the project or send a company to build it.
Edghill added that France was responding to an advertisement in the daily newspapers about expressions of interest in the Corentyne River bridge project.
He continued that the deadline for submissions will be on the 15th of February and only then will Guyana know what kind of interest the French Government has in the project.
Plans for a bridge connecting Guyana with Suriname began in 2019.
Former Minister of Public Infrastructure under the previous administration, David Patterson, was quoted by this newspaper as saying that one of the priority projects between Guyana and Suriname would be a bridge across the Corentyne River.
In the latter half of 2020, the two countries of Guyana and Suriname committed to the idea of ​​building the bridge.
The current administration also progressed the plans in October and together with a delegation from the Suriname Government visited the proposed site for its construction.
The Corentyne River bridge, they had indicated will connect South Drain, Suriname and Moleson Creek.
The following month, a formal agreement was signed between the two governments in the form of a Memorandum of Understanding (MoU) during President Irfaan Ali’s visit to Suriname.
In December, Guyana and Suriname, invited Expressions of Interest (EOI) for consulting services for building a bridge connecting the two countries.
A notice was also issued stating that the objective of the consultancy is to carry out a feasibility study, including environmental and social impact assessments and preparing detailed designs, drawings, cost estimates and application documents for the bridge.