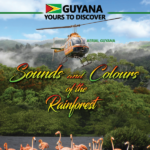 “It was a laborious venture. A lot of thought, time and funding went into this project but as a pilot I saw the beauty of this country that many people do not see especially those who live here. I wanted to share it with the people. ”

Kaieteur News – ‘Sounds and Colors of the Rainforest’, is the latest locally filmed and produced documentary, made by renowned Guyana Defense Force (GDF) helicopter pilot Mike Charles.
Launched at the Arthur Chung Conference Center on January 21 last, the documentary is part of a series of films captured by the GDF captain, known for his work in aerial photography and local documentaries.
Many of the other videos produced by Captain Charles over the years have received international attention at eco-tourism events in North America, Europe, Africa, Asia and Australia.
Described as a creative masterpiece, this film takes viewers on a journey where birds, mammals and reptiles are trapped in their natural habitat.
During the hour-long video, Captain Charles displays clips of the unique aesthetics of the landscape and the rich biodiversity found in Guyana’s deep rainforest and savannahs.
It provides viewers with close-up photos of some of Guyana’s rare animals and insect species; coastal flamingos, red macaw and emerald boa are just a few of the fascinating creatures featured in the documentary.

Cover image of the new locally produced documentary, ‘Sounds and Colors of the Rainforest’.

Captain Charles told Kaieteur News that while the film was proving challenging, his love for his country and the capture of visualization were the driving force behind his completion.
He explained that the images and clips, now included in the documentary, had been captured over an eight-year period.
Captain Charles, a helicopter pilot for nearly 40 years, said his work allowed him to experience the beauty of Guyana’s air first hand; something he wants to share with the world. As a result, he researched filmmaking and photography to help capture the images of what he experiences during his travels.
“It was a laborious venture. A lot of thought, time and funding went into this project but as a pilot I saw the beauty of this country that many people do not see especially those who live here. I wanted to share it with the people, ”he said.
Captain Charles said that doing ‘Sounds and Colors of the Rainforest’ took him and his crew to the remote locations found on the outskirts of Guyana.
He highlighted the great financial and personal sacrifices made by his team and supporters.
To this end, Caption Charles said he is very grateful for his team. He expressed special thanks to President Irfaan Ali, whose support, he notes, was instrumental in completing the film.
“It was a very special team of people who are very capable of swimming, driving the boat, cooking, staying out for long periods of time, taking good photos,” he explained, adding that some of the areas held are without touching them.
He noted, for example, that we went to Guns Village which was the last location in Southern Guyana, we had to travel for days and then had to wait to set up our equipment to film. That venture took us a week and we are spending over $ 1M to set up. ”
The producer also said that a lot of research went into the production. Captain Charles’ wife did the research on the different species caught in the film, which is later reported by the famous local broadcaster, Michella Abrahams-Ali.
Captain Charles noted the importance of “double check and double check, triple check before we issue it because you can’t afford to give the world something that is wrong with that amount of things we do and produce. ”
In that regard, the GDF pilot told Kaieteur News that by the time the film ended, it had cost at least G $ 25M to produce. Captain Charles noted however that he does not expect heavy financial returns on the project due to the lack of strict copyright laws here in Guyana.
He lamented the Government’s lack of interest in tackling the issue. According to Charles, because of that copyright problem, the film sold out on the streets for as little as G $ 50.
He stressed, “Guyana is the only country in this region that has outdated copyright legislation, so we need to change it and we need to change it now.”
So the filmmaker called on the government to address the problem, so that producers and artists can get better financial benefits from their work.
Meanwhile, Captain Charles hopes his material will help further boost Guyana’s prospects for eco-tourism – educating as well as entertaining viewers about the greatness of parts of the Amazonian rainforest known to many as the jungle of Guyana.
Individuals interested in watching or downloading a copy of the film can do so by visiting www.aerialguyana.com.