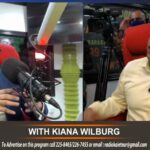 Govt. clearance of licenses for over US $ 55M in oil investments by local companies

Kaieteur News – Vice President, Dr. Bharrat Jagdeo last month that in assuming his job he made sure he cleared four sets of work permits for local companies that had approached the government with planned investments aggregated to a total of more than US $ 55M. He added that the previous government had these companies waiting more than two and a half years, even though their applications were above board.
These and other comments were made on December 23, 2020 during a special edition of Kaieteur Radio’s show, Guyana’s Oil & You, anchored by Kaieteur News Senior Journalist Kiana Wilburg.
During the heated discourse, Kaieteur News publisher Glenn Lall challenged the Vice President on his commitments to local content. Lall has long believed that the current configuration of the oil sector allows foreign companies to gain an unfair advantage in the oil and gas value chain, thus walking away the lion’s share of the wealth.
“Since we started in the job,” said Dr. Jagdeo in response, “I have personally intervened to clear four sets of work permits that people were waiting for, for over two and a half years. They met every requirement, every Guyanese company, over US $ 55 million. ”
However, the Vice President sought to point out that the oil and gas sector is capital-intensive, and that foreign companies are also obliged, as Guyana does not have the capital to meet all the needs of the petroleum industry.
“Developing an offshore facility or any oil and gas industry far exceeds the capacity of the country…” he said.
The VP, for example, noted that Liza’s Phase One project has an estimated cost of US $ 3.5 billion, while Liza Dau is estimated at US $ 6 billion and Payara at US $ 9 billion. The total cost of these three is estimated at US $ 18.5 billion dollars.
Despite this, the Civic Progressive Party (PPP / C) has indicated that it would not repeat David Granger’s administration’s mistakes in its local content policy. To date, the government has installed a local content advisory panel, which presented its first report of recommendations based on consultation with key stakeholders such as the private sector. The panel is expected to provide another report to the government, brighter and refined. These reports, according to Jagdeo, will shape the national consultations President Irfaan Ali is expected to have with the nation on local content. The government is committed to making the panel’s reports public.