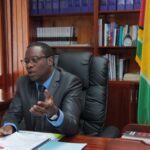 Kaieteur News – A Joint Trade and Agricultural Meeting between Guyana and Trinidad and Tobago (T&T) was held yesterday. The purpose of the meeting was to discuss Guyana’s difficulties as it related to the export of products to Trinidad and Tobago.
Guyana was represented by the Minister for Foreign Affairs and International Cooperation, Hugh Todd, and T&T was represented by their Minister of Trade and Industry, Senator Paula Gopee-Scoon, and her delegation.
During the engagement, Todd noted that small states, Guyana and T&T, often face challenges when entering into a competitive global arena. In light of that, he said “It is up to us to be able to engage fruitfully at the political level with the support of our technical teams,” so that both countries can enjoy the benefits of the Revised Chaguaramas Agreement and CARICOM Single Market and Economy (CSME) ).
In her address, T&T Minister Gopee-Scoon noted that the country’s relationship with Guyana remains important and also noted that Guyana is a major market for products exported from Trinidad and Tobago.
While engaging on Guyana’s market entry into Trinidad and Tobago, the ban on the import of poultry meat from Guyana was discussed along with an agreement to regulate equine trade being formalized. They also discussed the transportation of honey and other items and committed to holding future discussions among technical experts from both countries.
Also attending the joint meeting were Guyana’s Minister of Trade, Industry and Commerce, Oneidge Walrond and Foreign Secretary Robert Persaud, T&T Minister of Agriculture, Land and Fisheries, Clarence Rambharat and technical experts.