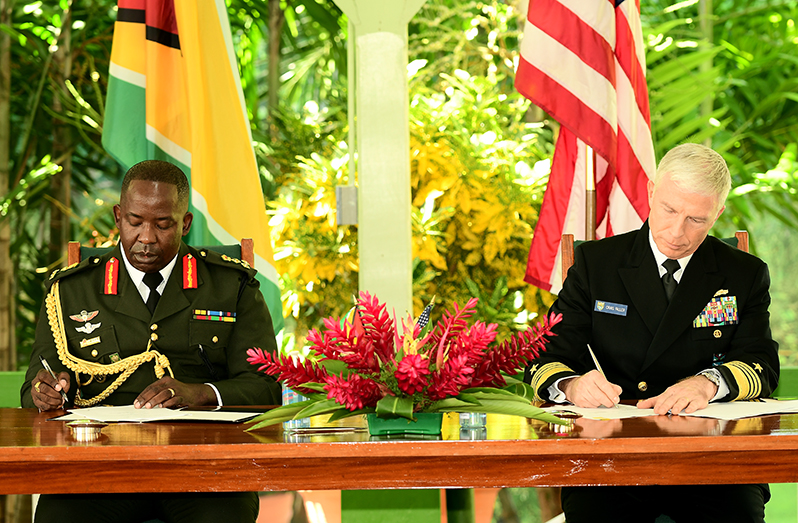 GUYANA and the United States of America will cooperate against regional threats and challenges and participate in military education programs, capacity building commitments, bilateral training and exchange of expertise. This was confirmed on Tuesday when the Guyana Defense Force (GDF) Chief of Staff, Brigadier Godfrey Bess and the US Southern Command Commander, Admiral Craig Faller, signed a Procurement and Cross-Service Agreement. Admiral Faller is on a three-day visit to Guyana
The agreement will also pave the way for the exchange of goods and services of equal value to support future bilateral defense cooperation.
During a visit by the US Secretary of State, Mike Pompeo in 2020, Guyana and the USA signed the Shiprider agreement, which allows for maritime cooperation between the two countries.
The chief military leader of the United States Southern Command last visited the country in 2017, when Guyana became the first South American nation to host the Caribbean Nations Security Conference.
Signed by Prime Minister Brigadier (ret’d) Mark Phillips; Minister in the Office of the Prime Minister, Kwame McCoy; National Security Adviser, Captain Gerry Gouveia; US Ambassador to Guyana, Sarah-Ann Lynch; and other government officials.

Chief of Staff, Brigadier Godfrey Bess said Guyana is in a region prone to natural hazards and man-made threats that have the potential to undermine security.
Apart from natural disasters, the head of the GDF explained that terrorism, arms trafficking, narcotics and human trafficking undermined the rule of law and polluted young people and institutions, leading to threats to regional security and stability. “These threats, if left unattended, can erode national security and undermine regional stability. The GDF is increasingly looking to defense cooperation with the aim of improving responsiveness to natural disasters and transnational criminal threats, ”he said. Further, he said defense cooperation also contributes to improving the professionalism and training of military officers. Noting that the GDF has a long tradition of defense cooperation with the United States, the Chief of Staff said that the GDF participates in the annual “Commercial Exercises” involving the United States, Canada and other regional states. He noted that officers and civilians had also benefited from support and training under the international military education and training program. Adding that Guyana is a signatory to the Caribbean Basin Initiative (CBI), Brigadier Bess said this allows for the building of partnerships in the security sector along with all other international collaborations and cooperation between the defense forces.

FORMAL EXCHANGE OF SERVICES
He noted that the signed Procurement and Cross-Service Agreement allows for partnership predictability and establishes a formal basis for the exchange of services between the militaries of the two countries. “The agreement is envisaged with respect for each other’s sovereignty and in accordance with the principle of non-interference in each other’s international affairs. I am confident that this agreement will advance the partnership between the US military and Guyana, ”said Brigadier Bess.
Department of Defense Southern Command (SOUTHCOM) Admiral Craig Faller said the signed agreement simplifies how the two governments exchange goods or services efficiently and effectively to support effective defense cooperation that benefits to both sides. “With this agreement, we are entering a new era of defense partnership. For over half a century, our countries have built a bond of friendship in our military-to-military cooperation; a kind of friendship we find among neighbors with shared values, neighbors committed to democracy, ”the admiral explained.

Across the Latin American and Caribbean regions, he said the United States has been the largest donor of COVID-related humanitarian aid.
To date, he said, SOUTHCOM has donated $ 155, 000 to Guyana, and more than $ 33M to the region. “In addition, despite COVID, the United States stepped up enhanced operations against transnational criminal organizations, along with allies and other regional and international partners,” said Admiral Faller. He continued: “These transnational institutions undermine democracy and are killing the right of citizens here in Georgetown and in my hometown of Pittsburgh, Pennsylvania; so that’s why we’re here. These threats require us all to work together. ”
He said that cooperation is key to success in every challenge that both countries face.
“We are stronger when we work together, and I’m sure, together there is no challenge or threat that our shared security cannot face. I am proud of the work we have done and look forward to our continued co-operation. We have a lot to do as neighbors, friends and, most importantly, as players who respect democracy and the rule of law and values, ”the US Admiral stressed.