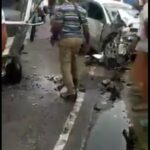 Yesterday Kaieteur – The driver of the truck involved in an Old Day crash on Coverden Public Road, EBD, was granted bail yesterday after appearing in Providence Magistrates Court on a charge of causing death by dangerous driving.
Balram Singh, 33, of Enmore, East Coast Demerara appeared before Magistrate Sunil Scarce, where the charge was read to him. Singh pleaded not guilty to the charge, and allegedly drove his motor truck on Dec. 31 in a dangerous manner to the public, causing the death of Danata Damon.

The scene of the accident in which nurse Danata Damon was involved.

The Magistrate granted bail of $ 250,000 and adjourned the matter until February 19.
According to a previous Kaieteur News report, the Singh-driven motor truck was traveling north along the west side of the road, which was allegedly speeding. The driver said that as he was in the process of diverting from a pothole, he lost control and ended up on a motor car route driven by a 26-year-old from the Block ‘X’ Diamond Housing Scheme, which was traveling south along the east side of the road. Reports are that both vehicles ended up in a collision causing both vehicles to receive extensive compensation. The drivers along with two other occupants of the motor truck and one of the car were taken to the GPHC. They were all admitted to the ICU in serious but stable condition. However, Damon, 26, a nurse and mother-of-one, who was in the car, succumbed to her injuries on New Year’s Day.