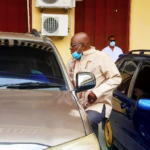 Lowenfield transfers SOPs, SORs to the Registrar of the Supreme Court for safekeeping

GECOM CEO Keith Lowenfield was spotted in the office of the Registrar of the Supreme Court yesterday. (Photo Credit: Main News)

Kaieteur News – Guyana Elections Commission (GECOM) Chief Elections Officer (CEO) Keith Lowenfield has handed over the original copies of all Vote Statements (SOPs) and Statements of Account (SORs) from the March 2, 2020 elections to Registrar of the Supreme Court, Sueanna Lovell.
The documents, which were transmitted yesterday, are in accordance with the order of the Chief Justice (ag), Roxane George-Wiltshire, to deliver the original SOPs and SORs to the Registrar for safekeeping.
Speaking to the media at the Georgetown Supreme Court compound, Lowenfield explained that he complied with the court order.
“I pass on the statement of everything passed to me as well as the recount statements,” Lowenfield told reporters present at the High Court yesterday.
During the transition, GECOM Chairman Justice (R’td) Claudette Singh was accompanied by the CEO, as well as other GECOM Commissioners – Sase Gunraj, Vincent Alexander and Desmond Trotman.
Earlier in the month, the Chief Justice (CJ) had ordered GECOM to transfer its SOPs and SORs to the High Court for safe custody, pending the hearing and decision of the second election petition case and was due to continue on April 7, 2021.
The orders were issued at the request of Senior Counsel Douglas Mendes, lawyer of the leader of the People / Civic Progressive Party, Dr. Bharrat Jagdeo, and Attorney-in-Law, Kashir Khan, who represent The Guyana Change party.
Mendes had asked for the CEO to produce all election documents and place them in the custody of the Court Registrar for possible later Court examination.
The CJ granted the request to allow the documents to be kept secure and noted that the SORs will also be retrieved and retained by the Registrar.