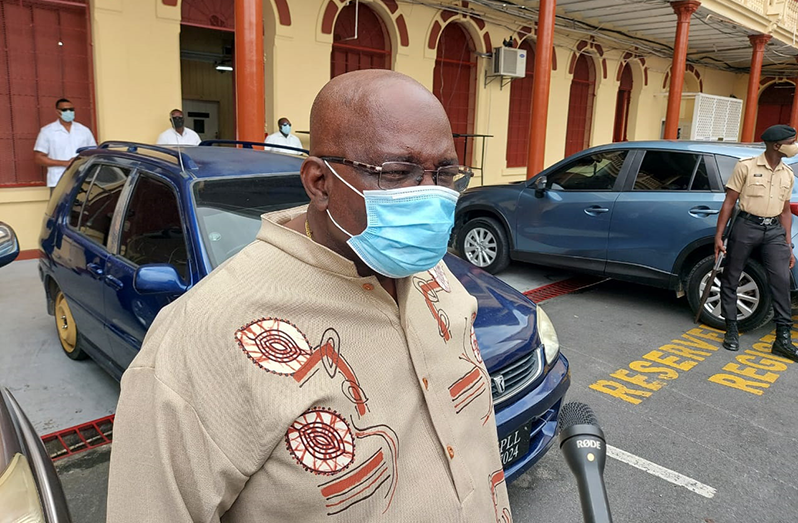 GECOM Chief Election Officer Keith Lowenfield on Wednesday morning presented the March 2, 2020 General and Regional Election Statements (SoRs) and Statements of Account (SoRs) to the Registrar of the Supreme Court, Sueanna Lovell. Delivery of the documents was in accordance with an order issued by Chief Justice (ag) Roxane George, SC last Monday. Lowenfield was accompanied by GECOM Chairman Justice (ret’d) Claudette Singh at Victoria Law Courts, Georgetown. Also in attendance were GECOM Commissioners Sase Gunraj, Vincent Alexander and Desmond Trotman. With 2,339 SoP and 2,339 SoRs to be presented to court, Lowenfield explained that the officials involved were “pressing” for the documents to be handed in by the end of the day on Wednesday.

Chief Justice Roxane George, SC, in quashing one of two election petitions filed on behalf of the political opposition, ruled last week that the first petition, 88 of 2020, will be heard, but agreed that the SoPs , before that and SoRs must be introduced for ‘staying safe.’ This was at the request of attorneys-at-law Douglas Mendes and Kashir Khan, who brought the court’s attention that the Representation of the People Act allowed the Chief Returning Officer to destroy all election documents after a 12-month period. has passed. Justice (ret’d) Singh had previously informed the Guyana Chronicle that Lowenfield is the ‘custodian’ of all election documents; however, Section 19 of the National Assembly (Validity of Elections) Act empowers the judge in an electoral court to make an order for the CEO to transfer those documents to the court.

Election documents, especially SoP, were the subject of controversy during events following the opinion polls, as several requests from competing parties and international organizations to have those documents rejected. Following the March 2, 2020 elections, in the same month, High Court Judge Franklyn Holder had rejected a request made to him for GECOM to produce the SoP for Class Four. Following a series of legal challenges and international intervention, a national recount of all the votes cast was implemented and the figures showed that the PPP / C received 233,336 votes while the APNU + AFC Coalition received 217,920 votes.

In an 88 of 2020 election petition, petitioners Claudette Thorne and Heston Bostwick ask the court to decide, among other things, questions as to whether the elections were held lawfully or whether the results were affected, or may have been affected by any unlawful act or omission and, as a result, whether the seats in the National Assembly were legally allocated. Since then, Justice George has given Attorney Roysdale Forde, representing the petitioners, until Feb. 12 to file his submissions and the respondents, including the Attorney General, until March 19, to file presentations in response. The parties will return to court on April 7, 2021.