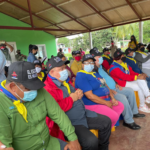 Government Officials wear caps with the phrase claiming the Essequibo during a meeting in San Martin, Venezuela, bordering Guyana.

Kaieteur News – Venezuelan president Nicholas Maduro Morro and his regime have begun to use PR proactively to present their stance on claiming the Essequibo.
The Essequibo has been in a bitter territorial dispute between Guyana and Venezuela for a number of years now. The matter has been brought before the International Court of Justice (ICJ), where it ruled on December 18, 2020 that it had jurisdiction to resolve the matter. Guyana’s argument is that he had sovereign rights over the coast and land territory because he was awarded the British Guiana at the time in the 1899 Arbitration Award.
In response to these recent developments, Maduro has since taken an aggressive approach in all directions. Notably, one of his strategies is to use public relations to aggressively state his stance on Essequibo’s allegations.
On Monday, several Venezuelan high government officials along with Venezuelan armed forces commanders visited the island of Ankoko and the native San Martin de Turumbang community. Ankoko Island and San Martin are located on the Guyana / Venezuela border in Eteringbang, Cuyuni River, Region Seven.
The Maduro Regime brought with them a team of doctors, who provided medical care to members of the Venezuelan Indigenous Community. They also shared toys, food and other gifts for community members.
However, apart from the outreach, government officials and army generals used the opportunity to inform the villagers, in a meeting, that they, like Venezuelans, had to fight with blood over Essequibo territory.
An official from late Venezuelan president Hugo Chavez Frias and 19th-century freedom fighter Simon Bolivar swore he will fight to conquer “La Essequiba” alongside Maduro.
Kaieteur News also noted that officers, who visited the area and hosted the meeting, wore caps with the phrase “La Essequiba Nuestra” (The Essequibo is ours) as they called on the villagers of San Martin to join with the fighting. They also shared leaflets with maps depicting the Zona Restoration (the Essequibo zone that Venezuela is fighting to reclaim).
The visit of the Venezuelan Government officials to the border area was made after a series of aggressive statements made by Maduro himself and his regime members.
The first was a tweet made last Thursday of pledging to re-conquer the Essequibo and issue a presidential decree reinforcing the country’s claim to the disputed territory. A few days later, Venezuelan Vice President Delcy Rodriguez, during a press conference, criticized the joint naval exercises conducted by the US Coast Guard (US) and the Guyana Defense Force (GDF) Coastguard.
He said it was part of US President Donald Trump’s plan to seduce Venezuela. During the same press conference, the Minister of Defense of the National Armed Forces of the Republic of the Republic of Venezuela, Vladamir Padrino also made some strong statements.
He said, “Our Bolivian National Armed Forces will protect all the geographical spaces that make up our Venezuela, inch by inch.”
Padrino also added “It has been ordered by the direction of the Chief Executive, Nicolas Maduro, the constant patrolling of our legal waters, the continuous observation of air and sea on the Atlantic coast.”
Venezuela’s aggressive behavior against Guyana has since been condemned by President Irfaan Ali and Opposition Leader Joseph Harmon. Canada, Caricom and the United States also denied Venezuela’s actions and called for a peaceful resolution in the ICJ.