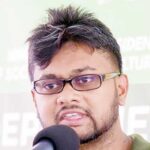 Kaieteur News – City Mayor Ubraj Narine has once again threatened to fire City Engineer Colvern Venture for ’embarrassing’ Georgetown Council.
In his most recent trade, the Mayor accused Venture of the corruption and poor management of the City Engineering Department.
“We have been embarrassed by the City engineer, Mr Colvern Venture, not only now, but since 2019 when I took office. The engineer continues to shame this Council and I will not take it this year. I will find some way to send Mr Colvern Venture home before the year is out, “the Mayor said Friday during a press briefing at City Hall.
The Mayor noted that Venture continued to behave in a trivial manner despite several warnings about its loose approach to the discharge of its duties at the Council. The Mayor stated that he is no longer prepared to suffer from Venture as his attitude reflects negatively on the Council.
According to the Mayor, Venture should have been sacked but he has people to defend.
Narine noted though that he will not adhere any nonsense to any officials or any minister.
The Mayor’s explosion comes after criticism of work done by the Council by Public Works Minister Juan Edghill and Minister for Local Government and Regional Development, Nigel Dharamlall.

Last month, Edghill ordered his Special Projects Unit to carry out maintenance work in the area that was supposed to be done by the Mayor and City Council of Georgetown.
The Minister for Public Works had criticized the Council for its management of Stabroek Market after an area flooded due to clogged drainage systems and a broken valve responsible for regulating water flow in the area.
The broken valve resulted in the water that was supposed to be regulated upside down, thereby inconveniencing the sellers.
In addition, the area’s vendors had complained about the flooding, and had been calling on the City Council to repair the systems. An official communiqué from the Ministry of Public Works said dealers were “bitterly complaining about the flooding.
The statement also stated that the Ministry of Public Works will not normally notice dormant projects that come under the Council as it is their responsibility. In addition, Edghill had said that the City Council is collecting revenue but yet cannot perform functions, as it should, especially in the markets. “What are they doing with taxpayers’ money? We are doing Albouystown and other projects that are already on their behalf, ”said Edghill.
In response, Mayor Narine said that while he was grateful that the valve had been installed, the City Engineer’s Department had to take the blame for exposing the issue.