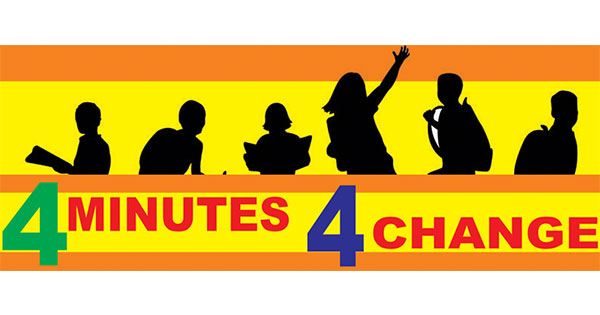 Today on 4 minutes 4 changes Sharia tells her story, sharing aspects of her childhood. She remembers….

I remember the feeling well; the scene went this way. I’m about to snack when I hear my dad’s key go into the front door lock. My stomach feels full immediately; he is home early, which means an even longer time in his presence – a time that my mother, siblings and I would happily spend without him.

When he’s home, we never know what to expect; would he get angry over the slightest thing and dump it on my mother or one of us kids? Whatever triggered his aggressive behavior was irrelevant; his presence always changed the mood of our home. That’s because my dad is a ‘beat’ guy. He likes to beat people. But not the people in his workplace or his drinking buddies, just my mother and us.

We are his family, and he should look after us and want to protect us most, but we are not that lucky. Instead of love, we accept the brunt of his negative emotions. We are the victims of his alcoholic mood swings, and his ignorance of the fact that he is abusing us; and we are negatively affected.

One of my earliest memories is of me sitting playing with a toy while my parents were talking nearby, I must have been about four years old. The dialogue between them heated up, and my dad slapped my mother into the corner of the room.

Over the years, I have seen many such events. Mum sheltered herself from the shots and urged him to stop, but he only stopped when he was ready. My siblings also had our fair share of slaps and beatings, but at the time, I failed to relate this behavior to violence. I knew I didn’t like it when it happened, but maybe, all dads were hitting their wives and kids, I thought. In my innocent mind, I believed that all children were afraid of their fathers.

When I was about eight, I spent two days at my friend’s house. There was no fear or tension when her father came home, and her father seemed happy to be around his wife and children. I noticed a flutter in the parents’ eyes and a natural ease between them and their children. They interacted with a bond of love and care and it was encouraging to be among them. I had never noticed any twinkling eyes or felt ease between my family members, and I began to question our lifestyle.

The fear I felt for my father turned into resentment over the following years. It was beyond me, why would a man choose a wife and have only children to abuse them, and make their lives miserable? It didn’t make sense. Another factor was my mother and her tolerance for her behavior. Year after year of abuse by a bully man; why he gave up with his treatment, we cannot understand. It’s scandalous to be slapped and punched, pushed around and humiliated by the person who is supposed to love and cherish you – the man who should protect and respect you, and yet that’s it ‘ what he suffered.

I am reasonably confident and flat-headed about this situation now that I am a teenager; I can talk about it without becoming anxious or having a heavy feeling in my stomach. But it took me a while to get here. I consider myself one of the lucky ones because I was proactive enough to make inquiries about my situation, which led me to a place where I could talk about it with someone who would listen.

Every problem can be solved when you take the time and patience to put it into perspective. It took a while to work from where my family problems were arising, but it was well worth the effort. You see, my parents were raised in an environment where alcoholism and random beating of women and children are tolerated. My Grandfather drank rum and abused their families, which meant that my parents, victims and witnesses of their behavior, had a negative effect.

Successive generations in some families, repeat the same unhealthy, harmful acts that were a part of their childhood. But I’ve broken that circle in my family, by first seeking help from a counselor- and by talking to my siblings, my mother and you. I wanted a family like my friend has; a family where I know, without a doubt, that I am loved and appreciated. While that might not happen, at least for now, my family members are working towards understanding our past, the present, and what we need to do for a better, more positive future.

If you are worried about a child’s welfare, call the CPA helpline on 227 0979 or write to us at [email protected]