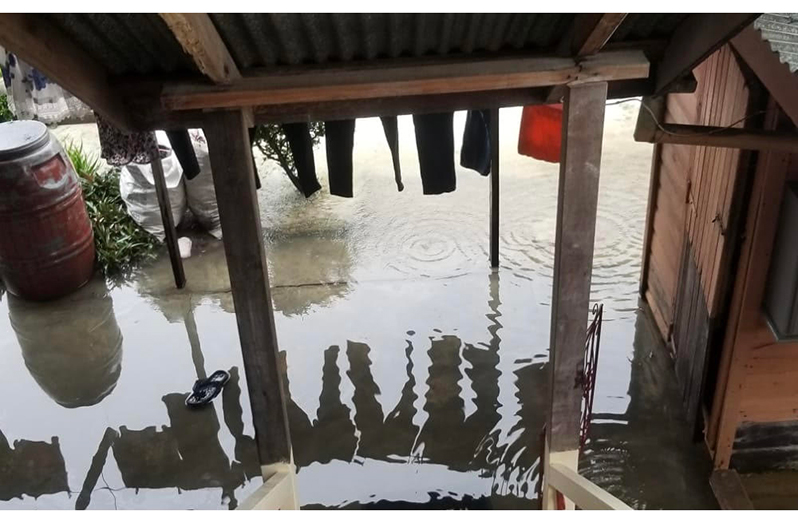 So far for the year, SOME households have been severely affected by flooding across 17 communities in three regions, with Region Two (Pomeroon-Supenaam) being the most affected region, and Nabacalis in Region Four seeing the homes most affected, with about 1,000 flooded homes.
Approximately 1,590 households were affected across five communities in Region Four (Demerara-Mahaica), while 1,200 households across 12 communities in Region Two were affected and 15 households in the Silver City in Region 10 (Upper Demerara-Berbice).
This is according to a report released by the Civil Defense Commission (CDC), and is based on assessments made between 1 – 9 January, 2021. The report was compiled by the CDC Readiness and Response Manager (ag), Salim October.

The report noted that “Guyana experienced above-average high tides between January 1 – 4, together with excessive rainfall across northern Guyana. It must be noted that this period follows intense rainfall and above-average high tides experienced throughout December, 2020. ”
Since then the SDC has distributed 2,705 cleaning, bottled water hampers, and continues to monitor the situation through collaboration with a number of agencies including the National Drainage and Irrigation Authority (NDIA); Ministry of Agriculture (MoA); Regional Democratic Council (RDC); and Neighborhood Democratic Councils (NDCs).
“The assessments revealed that many areas have remained overcrowded even at low tide. It was found that lands could not drain efficiently, as many were within basins already flooded during the December period and could no longer absorb excesses. Poor drainage in some areas has made this worse, ”the report said.
Notwithstanding the situation, the report noted that the flooding was not as severe as it could be due to the “maintenance and upgrading of drainage infrastructure in many areas across the coast, which resulted in a marked reduction in flood impacts.”

Nevertheless, some “residents involved in agriculture suffered losses related to crop damage and some livestock deaths.”
With the 478 households affected, the Urusara Charity NDC was the worst affected area in Region Two. The Charity Squatting Area and Kabakaburi followed with each area seeing 140 households affected. Other areas affected in this region included the Charities Housing Scheme; Dredge Creek; Abrams Creek; Siriki; Jacklow; Cozier Canal; Grand Buxton; David James Scheme; and Jacklow, Pomeroon.
However, the report noted that residents living in the Pomeroon River are accustomed to annual flooding and are more prepared and resilient to the situation. In many areas including the Charity Housing Scheme, and the Charity Squat Area, it was noted that flooding was exacerbated by the fact that many of the waterways were heavily vegetated and junk, including builders ‘waste from residents’ construction.

Low or basin-like lots were also another reason behind the flooding of many of the homes. In the Charity Squat Area the whole area was judged to be low with only a few lots built up in flood waters saved.
The report recommended cleaning the drains, and that residents should be encouraged to build new high-rise houses based on the building code, as many are currently below the minimum elevation and must be encouraged to do so. that.
Region Four, other than Nabacalis, Victoria, Golden Grove, Ann’s Grove on the East Coast, Mocha-Arcadia on the East Bank, were the other areas affected.