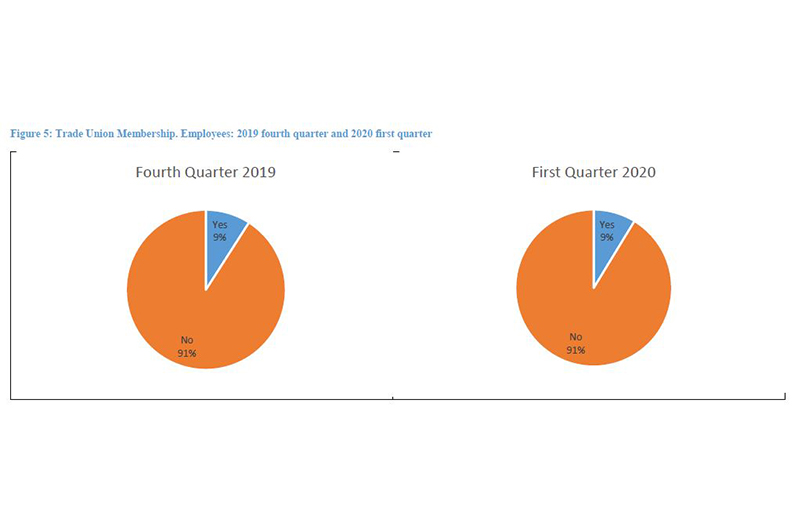 COMMENTS more than 50 percent of the people in the Guyana workforce with only primary level education or less, only nine percent of workers in Guyana are covered by a trade union, according to data and compiled by the Office of Statistics.
Veterans trade unionists believe that the low level of coverage has much to do with employees being intimidated by employers not to join trade unions.

“You have many employers in this country, even though you have an Act [law] instead, they do many things to scare the workers from joining the unions, ”noted Seepaul Narine, Secretary General of the Guyana Agricultural Workers Union (GAWU).

Narine has over 30 years as a trade union representative, and is also Treasurer of the Federation of Independent Trade Unions in Guyana (FITUG), one of two umbrella trade union bodies in Guyana. The other umbrella body is the Guyana Trade Union Congress (GTUC).

Narine noted that in many cases the workers are too scared to come forward, because they may face termination or discrimination for openly expressing their desire to join a union.

“Many workers would want a union, but once they know their jobs could be in jeopardy because the employer doesn’t want a union, then protect their jobs that come first, and they would withdraw, Said Narine.
He said the Ministry of Labor (MoL) must do more to prosecute those employers found to be forcing employees from joining a trade union.

In Guyana, trade unions are covered by the law under the Trade Union Act Chapter 98:03, and it is against the law for any employer to prevent or dissuade any employee from joining a trade union.

As organizations that look after workers’ rights, trade unions are seen as an important element for workers, as it protects workers from exploiting their employers.

“When you don’t have a trade union, the employer could walk on you; they could do anything for you. When the union protects you, then the employer has to think twice about the treatment they give to employees, ”explains Narine.

According to the Bureau’s first quarter 2020 Labor Survey report, the workforce in Guyana consists of a total of 264,862 employed people, but only about 15, 000 are covered by a trade union.
These statistics represent little change in the situation since the Bureau first began the Survey in 2017, when it was discovered at that time that only 10 percent of workers were covered by a trade union.

Ogle oversees employer / employee disputes when reports are submitted to the Ministry of Defense. Essentially, the MoL provides a safety net for unrepresented workers, providing an avenue for individual employees to file grievances. However, when a union is in place, the workers are collectively represented.

However, Labor Minister Joseph Hamilton offers a different view of the situation, in terms of what he believes is responsible for the low representation of workers by trade unions. He asked that the situation be exacerbated by the need for a more proactive effort by the trade unions.
In Guyana, joining a trade union is voluntary, and Hamilton believes the unions are not doing enough to attract the workers.

“Trade unions have, over the decades, played a purposeful, vibrant role, representing the interest of workers, but the issue is that they [employees] don’t trust them [trade unions], ”Said the minister.

He added: “At the end of the day, if people do not have confidence in their leadership, they will not want to join the trade union, so the onus is on the trade union to reinvent themselves. What worked for him [Hubert Nathaniel] Critchlow and so can’t work now; it’s a different workforce, and they haven’t learned it yet. That is why trade unions suffer, and will continue to suffer. ”

He argued that the issue could be not only the lack of employee representation, but also the issue of who the employees get to represent them. The minister noted the need to inject fresh blood into trade union representatives, rather than the many long-standing members that currently exist.
“Trade unions have done themselves a disservice by having leaders who have taken over the unions, and seen it as their own,” said the minister.

“Trade unions do not replenish leadership; people have been there for decades, although they are unproductive, although they do not serve the trade unions, they still have themselves there in all sorts of jobs. The leadership has these dinosaurs holding the union, so to the union … They have to change, if they don’t, they will disappear like the dinosaurs. “

Narine agreed that a more proactive effort was needed from the trade unions.
“The trade union movement needs to strengthen itself, and be more aggressive in looking at membership. They need to be more relevant in society; that’s a bad comment as a trade unionist, but that’s the truth. Unions need to be vibrant; be vigilant, and need to represent their members, ”agreed Narine.