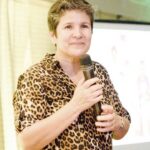 Kaieteur News – “It is a collective insult to our intelligence” was the response from Environmentalist Annette Arjoon-Martins to the recent words from Alliance For Change (AFC) Secretary General and Shadow Oil and Gas Minister David Patterson on the Coalition and he turned the Opposition’s support to renegotiate a rich Stabroek Block deal.
Although the coalition signed the widely criticized agreement with oil giant ExxonMobil, Patterson on a recent platform gave assurances that the Coalition would lend its support to the ruling Civic Party (PPP / C) ) if he wished to renegotiate the deal.

But his comments did not fit well with the Environmentalist who pointed out that the Coalition had an opportunity to secure more lucrative terms for Guyana when it signed the deal in 2016.
“He insults our collective intelligence even further when he claims that the Opposition will support any changes where Guyana can benefit more, knowing full well that his government had the opportunity to do so in 2016 but he chose to do so the exact opposite, ”Arjoon- Martins said.
Further on, he asked that “it is quite pathetic and barefoot” for the Shadow Oil and Gas Minister to brush up comments on “the vexatious issue of the contract and the ongoing narrative of who is responsible for its contents.”
This was added, Arjoon-Martins added, being “fully aware” that the then governing Coalition had renegotiated the 1999 contract with Exxon, adding in unfavorable terms such as the stabilization clause and allowing Exxon to “self-insure”.
Patterson said that during the Coalition’s five-year term in office, he did not get a chance to correct the bad provisions in the deal.
However, Global Witness revealed that the then Minister for Natural Resources, Raphael Trotman had ignored expert advice on a number of occasions and had signed the agreement in a short space of time.
Global Witness also said that Guyana left US $ 55 billion on the table because of its failure to secure a fair deal. The Stabroek Block 2016 deal has received a lot of slack since the details were made public, however, AFC leader Khemraj Ramjattan hailed it as one of the best decisions the Coalition has ever made.
The contract was kept by the public for a year and a half after it was signed. Even worse was the fact that the Coalition had also kept secret, the fact that it had received a signing bonus from ExxonMobil worth a total of US $ 18 million.
The deal also included many substandard provisions, crafted in ways that Guyana would suffer significant value spills. Among these are Guyana paying Exxon billions of dollars in taxes; pre-contract cost discrepancies; unspecified interest rates charged to Guyana for loans to the oil entities; weak environmental standards; Guyana’s inability to control oil production; and infrastructure cost discrepancies between Liza One and Liza Two Floating Production, Storage and Unloading (FPSO) vessels.
With a relatively comprehensive analysis done of Guyana’s Production Sharing Agreement (PSA) with ExxonMobil versus another, it would appear that Guyana would be in a class of its own out of over 130 PSAs.