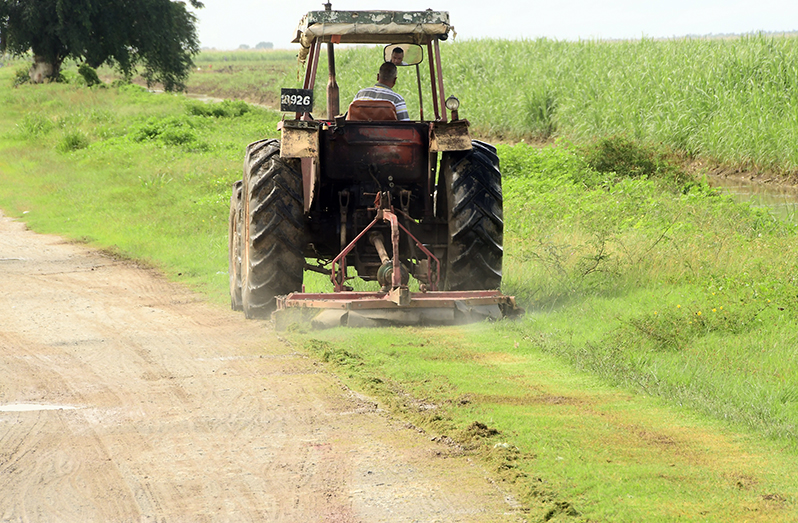 INCLUSIVE investments in the local sugar industry have been a catalyst for private cane farmers, who are assessing the situation with the hope of re-cultivating their lands on the West Coast and West Coast of Demerara, to meet the demand of the Uitvlugt Sugar Estate. .
The story of private cane farmers often goes unreported, as there is a general perception that the sugar industry is solely driven by employees of the Guyana Sugar Corporation (GuySuCo). However, the contribution of those stakeholders is considered crucial, especially in Uitvlugt, where profitability is said to be inevitable once the estate receives the support of private farmers.

“Private farmers play a big part in the development of Uitvlugt as a whole … of the 6,005 hectares of land belonging to the Uitvlugt Estate, 3,303 [hectares] leased to the farmers. However, due to financial constraints, only 1,637 [hectares] that land has been cultivated, ”Uitvlugt Estate Agriculture Manager Andrew McLeod told the Guyana Chronicle following a tour of the cane fields along the West Coast of Demerara, on Wednesday.

The Uitvlugt estate can produce 44,000 tonnes of sugar, but this can only be achieved after private farmers have used the lands leased to them.
“If all land leased to farmers were treated, this target [44,000] tons would be achieved and the estate would reach a profitable stage, ”said McLeod.

The Uitvlugt Estate, one of the three operational estates managed by GuySuCo, finished production for the second crop of 2020 with a total of 18,599.4 tonnes.
Over the past few years, this estate has been producing just over 30,000 tonnes of sugar annually, largely because the contribution of private farmers has declined significantly. The number of private cane farmers is said to have moved from just over 160 to about 20 in the last four years.

While this is true, McLeod said private farmers still produce 34 percent of the Tonnes Cane to Tonnes Sugar (TCTS).

REPRESENTATIVE
This contribution, while small compared to the expected output of private farmers, has been significant to the Uitvlugt estate, McLeod said.
“We need to engage with our farmers and have a private / public partnership if our three year business plan is to be delivered. My task is to appeal to the farmers to join so that we can make this estate successful, ”said the agricultural manager.
The government recently sought and received a $ 4 billion supplemental allocation for GuySuCo.
Presenting a disaggregation of the supplementary allocation ($ 4 billion), Agriculture Minister Zulfikar Mustapha said $ 2.1 billion will go towards the Albion Estate; $ 518 million to Blairmont Estate; $ 60 million to Uitvlugt Estate; $ 10 million to the Skeldon Estate; $ 746 million to the Rose Hall Estate; $ 533 million to the Enmore Estate and $ 60 million to the head office.
“With government intervention, I feel the farmers will join because some of the benefits the farmers would have received were lost and now it is being reintroduced… now I see the farmers on front of the estate, especially when they see sugar recovery is improving, timely marketing of the cans and reduced waiting hours, we will see results, ”McLeod reasoned.

OPTIMISTIC
Cane Farming Manager at Uitvlugt Estate, Mahendra Sukhu, was also optimistic that investments in the factory would stimulate the interest of the farmers.
“With the investment towards the factory, boiler improvements etc, we hope it will encourage them to get back on the flow,” Sukhu said in an inviting comment following the tour. Through these investments, there will not only be improvements to the factory, but also an increase in the support given to private farmers.
“For two years we tried to plant and tillage to get them started, but we stopped it. If it comes back on the flow it will help them get back in the field, ”said Sukhu.
Already, the estate has started supplying chemical and fertilizers to farmers based on the hectare they cultivate. Although these items are not free, farmers are given a year to make payments.
The estate has also been advising farmers on technical issues related to cane growth, and the application of fertilizers and chemicals to crop care.
Although those services are available, Sukhu said there are two major deterrent factors for private farmers and that is the price for sugar and the TCTS. Those have been the main concerns for the past three years, he said. A private cane farmer, Premraj Ramraj, agreed that sugar prices had been depressing over the years, but he was optimistic that the recent investments will bring about improvement in this area.

Ramraj, who returned to Guyana from Canada in 2001 to start cane farming, said: “For the past few years we were facing losses, but because we had all the machinery we could not disappoint. Remember as cane farmers we have diggers, tractors, trailers, so there is nothing you can do with the machine and we were losing or balancing the budget … we hope it will turn around with the money they get. It’s positive, but hopefully better prices. “
The private cane farmer grows over 600 hectares of land and produces over 2,000 tonnes of sugar annually.
He sees the investments in sugar as an encouragement to farmers who had lost confidence in the industry.
Going forward, Ramraj hopes to see improvements in the TCTS, improved access dams and a reduction in the high cost of leasing land.
In 2017, the former Coalition Government A Partnership for National Unity + Alliance for Change (APNU + AFC) announced the closure of several sugar estates across the country. Four sugar estates moved closed, with 7,000 sugar workers losing their jobs.
Plans are underway not only for the people of rehire, but to return this industry to viability through coordinated and prudent management, which is expected to come from private and public stakeholders.