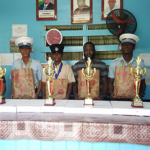 – Gifts to the Police

The four officers were selected by the Police on the basis of their attitude, commitment and hard work. Naidu, the club committed to working with the Outpost as part of its annual Say No to Crime campaign. Over the years the Rose Hall Town Police Outpost has received numerous donations from the club including bikes, TV Set, DVD player, stationery, chairs, sports gears and kitchen utensils.
Naidu urged the four adjudicators to maintain their high standards and continue to work hard every day to ensure that the small township is kept safe. The RHTYSC revealed that each year they hold dozens of award ceremonies to honor heroes and these include teachers, retired teachers, law enforcement officers, medical professionals, sports people, outstanding students, community volunteers and role models among others. Each of the umpires received a trophy, a medal and a collection of gifts.
Meanwhile, the RHTYSC in a joint project with its parent body, St. Francis Community Developers, delivered a large amount of much needed items to assist Police Outpost in fulfilling its mandate. The collective gift included a mattress, kitchen utensils, foam boards, hand sink, cleaning detergents, clocks, electric fans and stoves. The cricket teams also donated a number of face masks, face shields, hand sanitizers, cleaning detergents and COVID-19 posters to the Outpost as part of their COVID-19 response.
Assistant Secretary / CEO Naidu and Vice President Mark Papannah also visited the District Six Office of Mr. Jairam Ramlakhan and handed over a thousand anti-crime stickers to the Police.
The stickers, bearing the phone numbers of all police stations in the Old County, would be distributed free to places of business and residents. The sticker project was a joint project between RHTYSC, Berbice Cricket Board and F / H Edition in Georgetown.
Commander Jairam Ramlakhan expressed gratitude to the donors for their cooperation and praised the excellent work of the club.