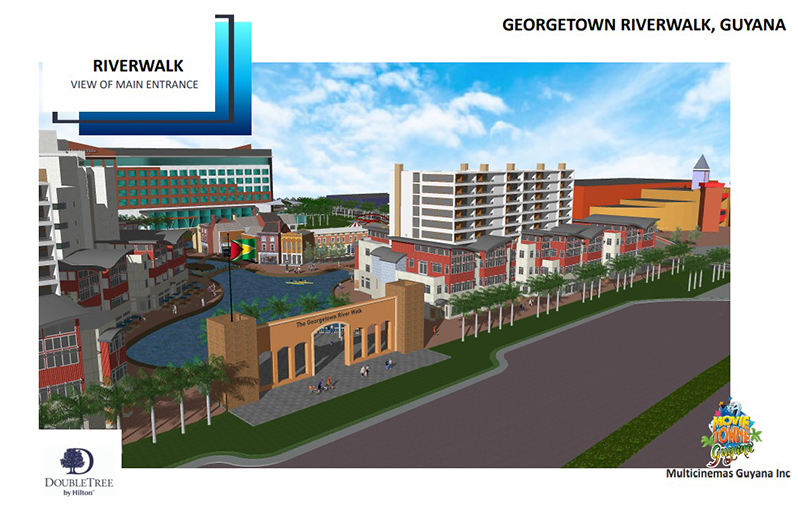 A MASSIVE transformation is expected in Turkeyen, Georgetown, as MovieTowne Guyana eyes provide an all-in-one family, entertainment and relaxation experience by expanding and establishing a multi-million dollar Georgetown River Walk hotel and amusement park next door.

The Guyana Chronicle understands that negotiations are underway for the establishment of DoubleTree hotel by Hilton, an American hotel chain that has more than 580 hotels and resorts globally. This hotel, once approved, will be renamed the ‘Georgetown River Walk Hotel’ and will be built just beside the existing MovieTowne mall and cinemas, located just off the Rupert Craig Highway .

“We are in discussions with the Government at the moment to get that on the ball,” Movietowne Guyana General Manager Rochelle Parsram told the Guyana Chronicle in an exclusive interview on Friday. The impetus behind this investment is to provide customers with an ‘all-in-one’ experience, whether local or overseas. With the addition of the hotel and amusement park, MovieTowne will become a central hub for family fun, relaxation and entertainment.

And Parsram argued: “It’s hard to find good entertainment in Guyana … it’s hard to find family-friendly entertainment in Guyana and so Guyanese and people coming to Guyana are looking for If the thought of a brand new hotel and amusement park was not enough, the General Manager highlighted that careful thought and consideration was going to design the hotel so that it could project the beauty of Guyana.

Parsram stressed that Movietowne business mogul and Executive Chairman in Guyana and from the original Trinidad-based organization Derek Chin is keen to add a “taste of Guyana” to the hotel. As such, the DoubleTree hotel will feature a ‘river trail’ where Guyana’s national flower, the Victoria Regia Lily, will be grown.

Once the necessary approvals are given, construction on this huge investment will begin immediately. $ 90M Food Court Expansion But the hotel and amusement park are not the only investment to be expected from Movietowne Guyana. Instead, it’s just another in a series of long-term investments. On the ground floor of the Movietowne mall, a Hollywood-themed food court is expected by May 2021. It will cost around $ 90M just to build out and beautify the space. However, Parsram highlighted that a number of well-known food franchises had already indicated their interest.

Although he could not provide names yet, he noted that these are international franchises already established at Movietowne locations in Trinidad. And he mentioned that the food court will boast all the well-known brands that offer coffee, fast food, meats and salads.

“We’re looking to add that variety and we know the brands will do well. We want to provide that first-class experience, ”he confirmed. But he noted that there is also scope for local businesses willing to invest in offering high quality standards to join the MovieTowne experience.

Parsram also explained that the idea is to create a synergy between the food court and the ‘fiesta’ entertainment plaza, which has already been a major attraction for the center. The plaza fiesta is also located on the ground floor of the center and is the first scene to be greeted once you enter the building.

MovieTowne Guyana opened its doors, first started with the cinemas, in March 2019. The gradual opening came after efforts had been made for about a decade to establish this respected business in Guyana. However, the eventual opening was limited by the post-Confidence motion developments, the protracted elections and of course, the COVID-19 pandemic.

Despite all that, Parsram was optimistic that 2021 would be a year of great achievements for the business. Furthermore, Guyana’s rapidly evolving business landscape presents a great opportunity for the business to meet emerging market needs.

Importantly, however, he emphasized that Chin’s vision of Movietowne developments in Guyana far surpasses the growing oil and gas sector and spin-off developments.

“Now that we have the market that is more readily available, we are putting more emphasis on our mall experience to ensure we create that kind of brand and feel to allow the investors that and those people who will now be in Guyana experience ‘world-class’ here, ”said the General Manager.