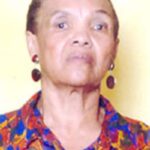 Kaieteur News – The case management conference (CMC) for the appeal issue filed by the convicted quartet and sentenced for the murder of 72-year-old Clementine Fiedtkou-Parris, known as ‘Robb Street Granny,’ was held yesterday at the Court of Appeal in Kingston.
Orwin Hinds called “Red Man,” of Burnham Boulevard, Mocha, Demerara East Bank; Kevin called October at “Troy,” of Second Street, Agricola, Demerara East Bank; Cleon Hinds and Roy Jacobs called “Chippie” or “Black Boy,” of Evans Street, Charlestown, each serving 81 years in prison for the murder. They have since appealed against the conviction and severity of the sentence.
Yesterday, the Chancellor of the Judiciary, Justice Yonette Cummings-Edwards, and Appeal Justices, Dawn Gregory and Rishi Persaud, presiding over the matter, gave the lawyers representing the men’s timelines to deliver their written submissions and the time to which responses should be submitted by the Counsel of State.
The court set March 11, 2021 at 09:30 o’clock. to hear the appeal.
In the case, Hinds and Jacobs are represented by attorneys-at-law, George Thomas and Dexter Todd, respectively. In addition, Hinds and Autumn are represented by Attorney-in-Law, Adrian Thompson.
Fiedtkou-Parris of Lot 42 Robb Street, Georgetown, was killed at her home on June 30, 2011, as part of a conspiracy for money involved in a property dispute.
Back in 2015, Justice Navindra Singh sentenced all four men to serve 81 years each in prison for the vicious assault. The men must serve a minimum of 45 years in prison before they are eligible for parole.
According to the facts of the case, on the day of the fatal shooting, two men entered the woman’s yard and asked for an audience with her. After hearing the persons request, he moved to the door. He opened a shotgun at her, hitting her several times about the body. After the shooting, the assailants managed to escape in a waiting car.