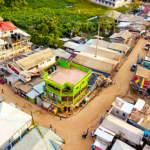 An overhead shot from the Port Kaituma waterfront where the businessman’s building was invaded by suspected “Sindicato” gang members.

Kaieteur News – Three Venezuelan nationals suspected of being members of the notorious “Sindicato” attacked the home of a Port Kaituma businessman on Tuesday and stole guns, ammunition and millions in cash.
Businessman Elroy Allam, 56, popularly known as “Chinee”, owns a hardware store in Port Kaituma, North West Region (NWD), Region One and lives in the Waterfront. According to police, the armed foreign armed robbers entered the Allam building at about 23:00 hours. The robbers caught Allam and his wife at gunpoint and searched the house.
During the suffering that lasted some 32 minutes, the armed robbers took three guns and a quantity of bullets: one .233 semi-automatic rifle with 30 live rounds and a magazine, one .32 semi-automatic pistol with ten live rounds and two magazine, and a 12-meter shotgun.
The gunmen also stole four gold chains, four gold rings and $ 10M in cash and repaired their escape on a boat. The matter was reported and Guyana Police along with the Guyana Defense Force (GDF) Coastguard in Morwhanna responded immediately by combing the Aruka River.
According to police, the joint service ranks reported that they had seen a boat heading toward Morwhanna. However, when they attempted to approach the ship, the occupants opened fire on them. The ranks reported that they had also returned fire but the boat plunged off and the shooters escaped to Imbetero, an area on the border between Guyana and Venezuela.
Investigators have since reported and revealed that they have since canvassed the area and are soon to retrieve video footage from surveillance cameras. The perpetrators of the robbery are believed to be part of the notorious Venezuelan gang known as “Los Sindicatos”. Recently, there have been many reports that a Guyanese working and living in areas bordering Venezuela has been stolen by the gang.
There have also been clashes between Venezuelan gunmen and the Guyana armed forces in the Cuyuni River, Region Seven.