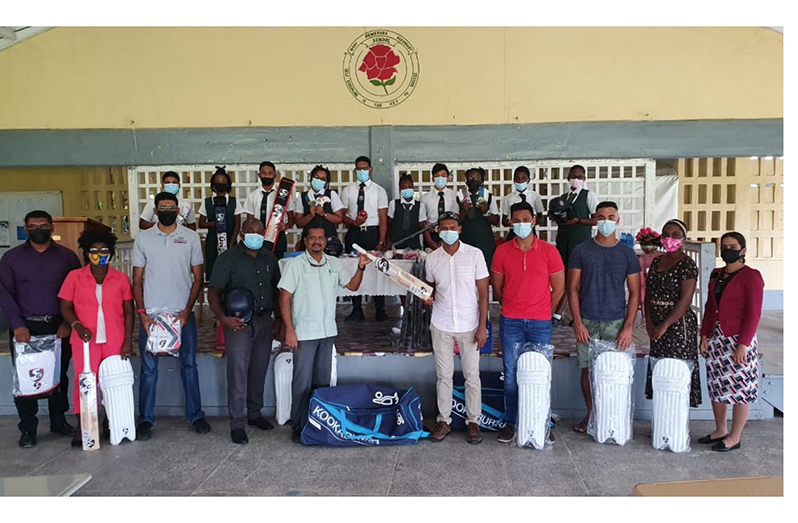 The CRICKET development at West Demerara High School has received a major boost following the introduction of a large amount of equipment last Thursday.

Some students and teachers gathered at the school, located in Pouderoyen, a few miles north of Demerara Harbor Bridge, on Thursday morning to receive the equipment from Alumni representatives.

Some computer supplies were also part of what is an initial gift to the school from the Alumni, which is based in the United States and Canada.

The school’s beam headmaster, Harrinarine, was particularly pleased to receive the pieces of equipment, noting that the school has not only a vibrant cricket program, but that students are active in other disciplines.

While Crawford is a gold medal winner in the Caribbean, Archer has also been on the podium in the National Schools Championship, the Inter Guiana Games, the CARIFTA Games and the South American Championships. She is currently on scholarship in the United States of America.

The Alumni will soon be donating a second gift to the school, in the form of a gas powered power washer, weeding machine, printers, computer supplies, football and volleyball.

Former Guyana and West Indies captain Chanderpaul, meanwhile, addressed the students on the need for them to balance academic activities and sporting excellence.

He encouraged students to focus on achieving their goals and setting high standards for themselves. The most capped Test player in the Caribbean offered that all the goals can be achieved with hard work, dedication and commitment.