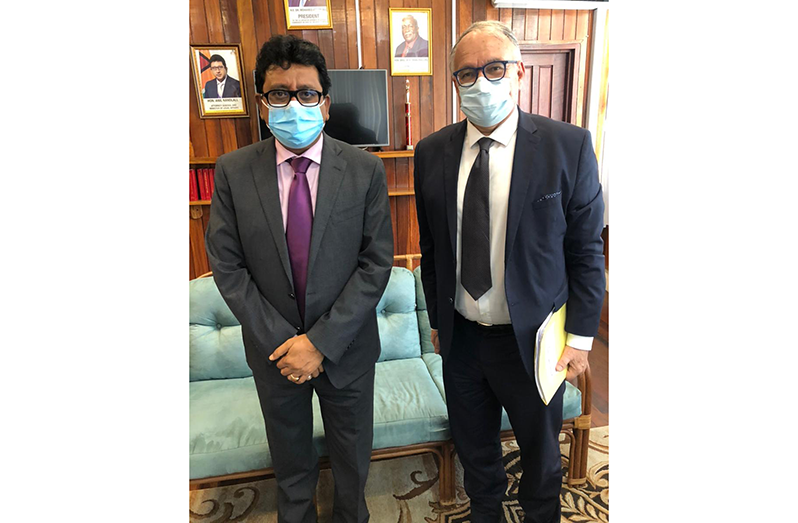 The RESIDENTIAL Ambassador of the French Republic to the Cooperative Republic of Guyana, Antoine Joly, has indicated that his country will record their support for Guyana in the border debate with Venezuela.

Ambassador Joly made the remark while meeting with Attorney General and Minister of Legal Affairs Mohabir Anil Nandlall, SC, on Tuesday.

“The ambassador condemned the use of force by that country including their latest raid into Guyana’s territorial waters and the arrest and detention of two fishing boats with a Guyanese fisherman,” a press release from the Attorney General’s Chambers noted.

“He (Ambassador Joly) acknowledged the support Guyana has received from the Caribbean Community (CARICOM) and the global community and is committed to giving a voice to the same,” the statement stated further.

During the meeting the Ambassador raised concerns with the Attorney General about the large number of Haitians using Guyana as a transit point en route to French Guiana, describing it as a growing problem that must be addressed ‘ grip it.

They also discussed the need for better, mutual legal assistance on criminal matters and continued co-operation in the Criminal Justice sector due to the large number of Guyanese in France’s Guiana prison system.

The Attorney General was congratulated for the pivotal role he played in the recent fight for democracy in Guyana and took the opportunity to express his thanks to Ambassador Joly for his country’s support in the process, the press release noted.