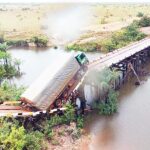 The weight of a truck traveling out of Lethem on Saturday night to part of Pirara Bridge, located on the Linden-Lethem route, Region Nine, caused a crash.
With vehicles stuck in or out of Lethem, Minister of Public Works Bishop Juan Edghill said urgent work is expected to be done as soon as possible.
This publication understands that GPP 7704 motor lorries have damaged at least 50 feet of the 160-foot-long bridge. Other stranded vehicles include a fuel tanker that has to deliver supplies to the Lethem Power Company (LPC).
During a phone call interview with Lethem’s Deputy Mayor Debra King, she noted that from 15:30 hours yesterday, the truck was still stuck on the collapsed portion of the bridge and was being unloaded.
King added that because of the rising water in the Ireng River, and the continuous rainfall, they cannot build a bypass until the bridge is repaired. “Lethem Regional Democratic Council (RDC) has put in place a boat system that transports people across the river… the fuel tanker that transports fuel for LPC is also trying to use a boat system to shuffle across the fuel , ”King noted.
The Deputy Mayor added that until the truck is removed from the bridge, he cannot specify the extent of the damage and what repairs would be needed. He also noted that no major work has been done on the bridge for some time now.
He added, however, that they are trying to resolve the matter as quickly as possible, even if it is for light vehicular traffic only.
Meanwhile, Minister Edghill revealed that the private sector had been hired to assist in getting the truck empty and removing it from the bridge.
According to reports, the last time the bridge was damaged was during November 2019.

The truck that crashed part of Pirara Bridge.