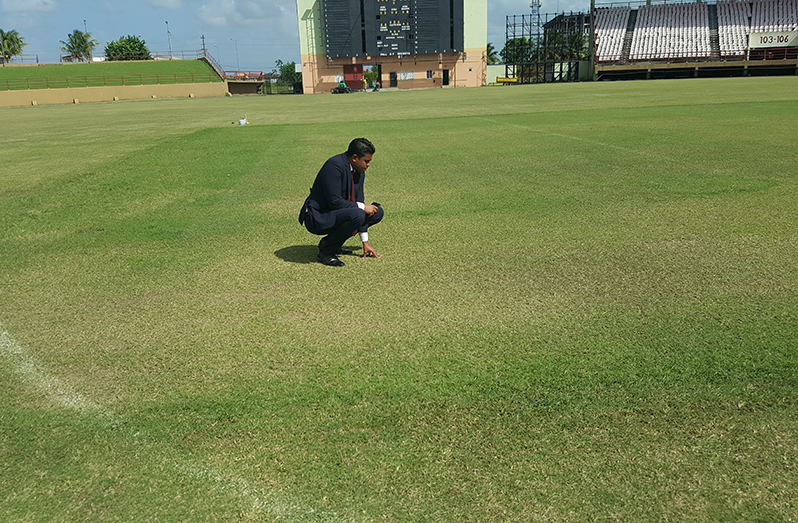 FOLLOWING reports in various media outlets by Guyana’s National Stadium Manager, Anthony Xavier, that the Kashif and Shanghai tournament December 29 – January 1 badly ‘damaged’ the pitch at Guyana’s lone international cricket facility, Minister of Culture, Youth and Sports, Charles Ramson Jr., has doubled the fact that the venue belongs to the people of Guyana and not a specific entity.
“Let’s be clear that the Guyana National Stadium is not owned by anyone; the people of the country who own it. It is not owned by any sports; it belongs to the various sports that require its use so that they can develop their position nationally and globally, ”Ramson told reporters, after wrapping a visit with other members of his ministry, Guyana National Stadium.

At the football tournament, held at the Guyana National Stadium, the Kashif and Shanghai tournaments returned.
The Guyana Football Federation (GFF) witnessed the event as part of its UEFA Bounce-Back Program as well as preparing for the Qatar World Cup qualifying matches, which will kick off on March 25 against Trinidad and Tobago.
Facts show it was almost four years since football was last played at the Guyana National Stadium, before Dec. 29, while cricket was last played at the end of February last year.
There is no immediate plan to host cricket at the venue, but Guyana Cricket Board (GBB) Secretary Annand Sanasie was quoted in an article: “Nowhere in the world would anyone play club football on the international ‘square’ of cricket ( area) where the fields are laid) in the rain.

“We wrote to the Stadium last week asking for permission to use it to prepare the 50-over Regional squad with some match assimilation sessions. We have not yet received a response. ”
“It is drawn to my attention that, on January 6, a body calling itself the Guyana Cricket Board (GCB) wrote to the Stadium Managers to request the use of the Guyana National Stadium to prepare them for the Regional Super50,” he said Minister Ramson.
He added “in any event, I am advised, the landowners need three weeks’ notice, to get the field squared ready for use.”
Xavier said, according to an article in Kaieteur News, “the six pitches on the square and almost the entire grassroots playing area, including the bowler’s runs are in terrible condition due to the football played there in the rain” .

However, Ramson was confused after his visit yesterday. The ground staff at the stadium showed a different picture to that reported.
Ramson believes the report is “a concerted attempt to curb the ministry and also prevent the use of the national stadium for football.”
According to Ramson, “The GFF also needs to be prepared for their preparation and representation for the World Cup which will be in March this year.”
“There is no damage to this pitch to prevent its use in its usual preparatory timing. So then the question is, why would there be a disingenuous attempt then, for the stadium balcony and the ministry, only for the use of cricket and favored individuals, ”the minister stressed
Ramson lamented that, for the people of the country to have maximum use of the Guyana National Stadium, “We must be able to have activities for people to actually use.”