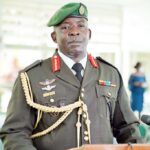 Kaieteur News – Chief of Staff Brigadier Godfrey Bess informed the public on Saturday during a live-streamed presidential briefing that the Venezuelan Navy was last seen in Guyana waters four days ago.

Bess at the time was responding to media questions about the consistency of patrols by the Spanish-speaking nation in Guyana’s territorial waters.
Bess responded that Venezuelan naval vessels have been observed in the Guyana Distinguished Economic Zone (EEZ) since January 14. He went on to state that the Venezuelan military presence was last seen at EEZ Guyana on January 27.
“We recognize that their approach has been in our EEZ approximately 60 nautical miles east of our center line and approximately 25 nautical miles off the coast of Guyana. The last time they’d been there was on the 27th of January ”, says Bess.
The Chief of staff stated that this sighting had been confirmed through Guyanese air patrols. Bess said the Guyana Defense Force (GDF) has been logging Venezuelan military operations and will continue to do so.
He also ensured that GDF was ready and is currently conducting patrols in Guyana’s EEZ to ensure its “military presence is felt”.
The rise of the Venezuelan Military in the Guyanese territories comes after its Commander in Chief and President, Nicholas Maduro issued a presidential decree on January 7, promising to re-conquer the Essequibo.
The Maduro decree claims to establish a new maritime territory in Venezuela called ‘Territory for the development of the Atlantic facade’.
The so-called Atlantic facade, according to the Ministry of Foreign Affairs, covers Guyana’s territorial waters, a continental shelf, and its land territory west of the Essequibo River.
In accordance with this plan, Maduro had ordered through his Minister of Defense, Vladamir Padrino, to ensure the constant patrol of Venezuela’s alleged legal waters, and the continuous observation by air and sea on the Atlantic coast. “
The Essequibo has been in a bitter territorial debate between Guyana and Venezuela for a number of years now. The matter is currently before the International Court of Justice (ICJ), which has since ruled that it has jurisdiction to resolve the matter. Guyana’s argument is that he had sovereign rights over the coast and land territory because he was awarded the British Guiana at the time in the 1899 Arbitration Award.