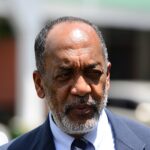 Kaieteur News – While it is reasonable to expect unplanned disruption in operations, what must be unacceptable is the same type of disturbance caused by the same type of equipment failure, which the Government accepted excessive on admission for over a year. Expressing these and other critical statements is the former Director of the Environmental Protection Agency (EPA), Dr. Vincent Adams, on the recent news of ExxonMobil’s escalating torches from its pilot levels in their Guyana offshore Liza Destiny operations.
ExxonMobil, on Saturday, contacted the issue of increased torching due to a faulty seal on the gas compressor.
It was the only gas compressor that malfunctioned in 2020. It resulted in Exxon – which is pouring itself out as an effective controller of its waste – in flailing 16 million cubic feet of natural gas for over a year. This gas released over 250 toxins including, cancer-causing agents such as benzopyrene, benzene, carbon disulphide (CS2), carbonyl sulfide (COS), and toluene. It also releases metals like mercury, arsenic, and chromium and nitrogen oxides.
Not to mention that Exxon said on record in 2016 that it would commit to no torch from day one after starting the operation. The truth is, however, that “Day one” has turned into a 300-plus day, Dr. reminded Adams.
What the former EPA Director went on to highlight as “even more active and careless about the health, environment and wellbeing of the People of Guyana”, was the Exxon Esso Exploration Production Guyana Limited (EEPGL) unveiled at Exxon in during the Payara review.
In that revelation, Dr. Adams, EEGPL had said it was acceptable to emit air pollutants by torching because Guyana is a carbon sink and therefore has the ability to absorb more pollutants. This proposal, says Dr. Adams, led to an immediate EPA rejection.
He said the local regulator even thought it reasonable and also demanded that Exxon comply with the same standards, which they must adhere to in the United States that allow maximum torching of 48 hours after startup.
“Further, they could never answer the question of why this type of torch failure only occurs in Guyana, when Guyana, by a long shot, has not been their first operation and experience, and when they probably have similar types of equipment right in other parts of the world, ”Dr. Adams.
He went on to remind that these types of harassment are easily avoidable and cannot be blamed on the manufacturer, especially in terms of brand new equipment, when considering that Exxon is aware that it has the responsibility to ensure that the manufacturing is carried out fully in accordance with the design specifications through a “rigorous” Quality Assurance / Quality Control Plan, which they must oversee.
“EPA emphasized this to them several times,” he recalled, “although it should have been second nature to a company of this status. They cannot wait until the equipment arrives to find that the wires are incorrectly aligned, or that the seals are made of the wrong material, when they have done this many times before. Why is Guyana different? ”
This unfortunate recurrence of an incident highlights the urgency for the Government to provide the resources to properly equip the EPA with the necessary capacity to oversee these operations, Dr. noted. Adams, including a 24/7 on-site presence and investing in training and recruiting the necessary specialist skills – all already incorporated into a plan developed between the EPA, the Department of Energy (DoE) and the World Bank.
Related to this is Dr.’s urgency. Adams for the government to ensure that the design flaws in the Liza Destiny license do not present Liza Dau and Payara’s developments.