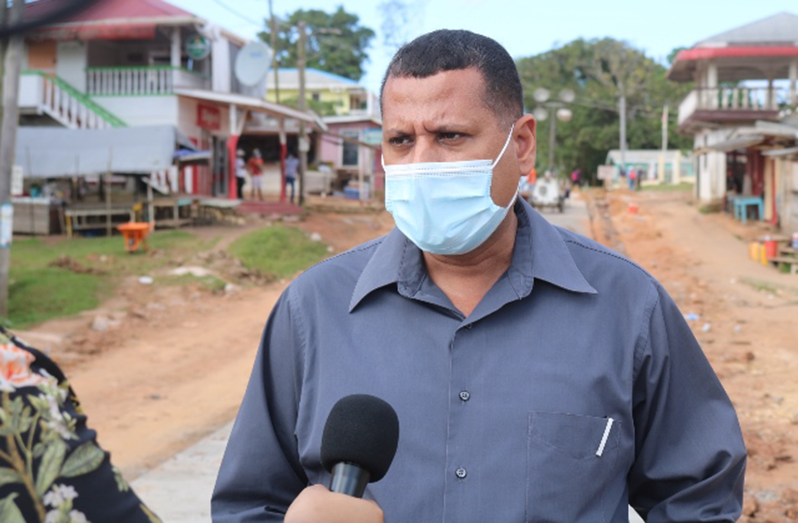 the first phase to be completed within two weeks

WORKS is making progress with the construction of an $ 83.9 million concrete road in Santa Rosa in Moruca subdivision in Region One. Phase I started from the 500-meter-long road from Santa Rosa Bridge in Kumaka and extends into Santa Rosa community land.
Last Friday, Minister of Housing and Water, Collin Croal; The Regional Chairman, Brentnol Ashley and a Project Engineer at the Ministry of Public Works, Alexander Baharally, examined the site and the ongoing roadworks. The first phase of concrete work on one lane of Santa Rosa’s main access road is currently ongoing, the Department of Public Information (DPI) reported.
Baharally said the other lane will be completed within two weeks after which work will begin on the drainage. According to DPI, Minister Croal said funding for Phase II of the road project would be provided in the National Budget of 2021. He explained that the second phase of the road would continue straight on to Kwebanna Village.
The minister added that the project is yet another demonstration of the government’s commitment to the people and, more importantly, to the residents of Moruca and the entire Barima-Waini Region.

“When we campaigned, we committed to improving the road networks across our country, but especially the hinterland where we want to make as much road connectivity as possible,” said Minister Croal. The minister said he was satisfied with the quality of the work carried out so far, and the speed with which the contractor is working. Meanwhile, the Regional Chairman said the project complements the infrastructure work the region has included in its proposed Budget for 2021. Roadworks are expected in Manawarin, Arawnsa, Waramuri and satellite communities in Santa Rosa Village , says Ashley. “The people of Moruca aspire to such an infrastructure development and knowing that giving people great joy to know that the Government is delivering on its promise is just the first step of what is yet to come,” Ashley was quoted as saying DPI.

The construction of the Santa Rosa main access road is part of the Ministry of Public Works’ 2020 program. Mohamed Ramzanalli was awarded the contract in December. During a visit to the region last year, Works Minister Juan Edghill said the government had allocated nearly $ 350 million for road restoration and construction in Region One, in the 2020 National Emergency Budget.

About $ 14 million will be spent to complete internal road maintenance at Baramita, while the second phase of restoration work at Barbina Swamp Road will be done at a cost of $ 39.6 million. A further $ 75.3 million was earmarked for the reinstatement of the Compound Road (Phase IV) in Mabaruma and $ 13.5 million to maintain later in-house roads there. The contracts for these roadworks have been awarded.