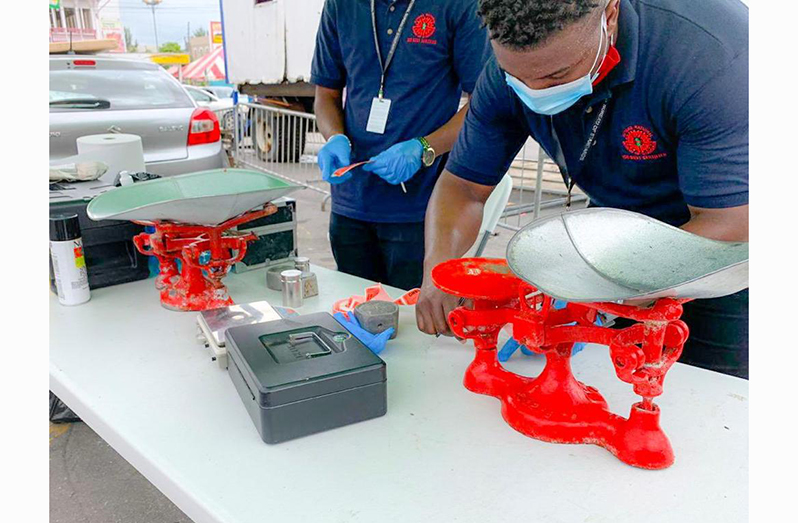 Last year, the Guyana National Standards Office (GNBS) conducted some 1217 surveillance checks that resulted in the seizure and removal of 269 devices because they were either incorrect, unchecked or in a state of disrepair.
According to the center, 2020 saw a significant decline in inspections, which are done to ensure that devices used in stores and markets across the country are stamped and in an acceptable condition.
Last year, GNBS checked a total of 29,675 new devices, which included 638 ratings, 1,473 masses and 27,554 electricity meters for the Guyana Power and light Company (GPL).
According to GNBS’s Public Relations Officer (PRO), Lloyd David, the center achieved major successes in 2020 as many of its targets set at the beginning of the year were achieved, despite obstacles caused by the COVID-19 pandemic.

Significant efforts have been made, says David, under the Legal Metrology Program to check weighing devices used in commerce to protect consumers and ensure fairness in commerce.
In addition, he said under its Industrial Metrology Program, GNBS continued to provide calibration services to a wide range of stakeholders during the year.
Furthermore, he noted that devices already in use in shops, markets and other locations such as supermarkets, manufacturing companies, rice mills, hospitals, airlines, post offices, a total of 5009 ratings, 9977 masses, 140 weighbridge scales, 202 electricity meters, and 59 humidity meters were verified.
For volumetric measurements, GNBS checked 1722 petrol pumps, 270 meter meters, 30 storage tanks and 114 fuel tanker trucks.

These devices were checked for Rubis, GuyOil, Sol Guyana and other private companies nationwide to ensure measurement accuracy and compliance with security requirements.
Overall, GNBS reported a marked decline in the validation of devices already in use during 2020 compared to 2019.
This could be attributed to the necessary precautionary measures taken by the GNBS during the pandemic.
Notably, in 2020, David noted that the GNBS had conducted a series of measurement training for the Guyana Police Force (GPF), which focused on the validation and use of respirators, speed guns and the use of international units in the international system.

For Legal Metrology, he says in 2020, GNBS worked to ensure it fulfilled its measurement role in the Oil and Gas Sector.
Throughout the year, inspectors were fully involved in the monitoring of the validation of custody transfer meters on the offshore Floating Production Storage Ship.
For Industrial Metrology, he said that GNBS continues to provide essential calibration services as industries increase the use and demand for traceable and reliable measurements in Guyana.
Measuring instruments were calibrated in the areas of mass, dimension, volume, pressure and temperature. This resulted in the calibration of 1679 measuring instruments during 2020.
GNBS is looking to expand its services to stakeholders in Legal Metallurgy and Industrial Metrology.
For 2021, GNBS has acquired a fitted Mobile Unit, which will visit strategic locations across the country to conduct mobile checking of devices used in other markets and business outlets. In addition, the center is actively seeking to employ inspectors from other remote regions to ensure access to its services. Finally, calibration services will expand in the areas of volume, temperature, pressure and torque, which are much sought after by industry.