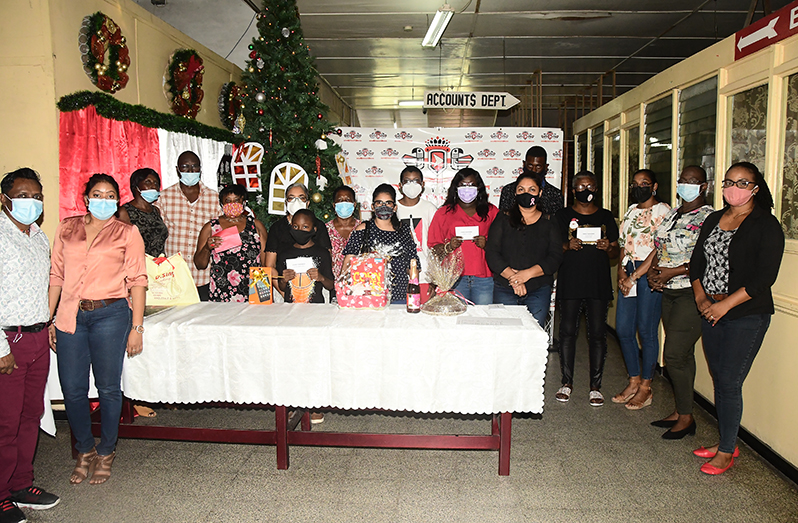 THE Guyana National Newspapers Limited (GNNL), publisher of the Guyana Chronicle, on Tuesday distributed prizes to 10 people who participated in its annual Christmas promotion. The month-long competition garnered over a thousand entries. The entity’s General Manager, Moshamie Ramotar, during her address at a simple ceremony, thanked the winners for their continued support of the news agency. He encouraged them not only to support the announcement when there is a promotion, but throughout the year.

The General Manager further stated that the sponsors should be supported as without them the promotion would not have been possible. Meanwhile, GNNL Marketing Coordinator Akash Persaud, in his remarks, noted that this is the seventh year that the promotion has been held. Attendees informed that the awards were given by Riaz Computer Center, Church’s Chicken under Camex Restaurants Inc., Java Coffee Bar, Roraima Group of Companies, I&S Trading and D Singh Trading.

A cake hamper from the Guyana Chronicle, an Amazon Fire HD Tablet, a trip for two to Arrowpoint Resort and food vouchers and hampers were among the prizes on offer. Desiree Sobers, who won a food hamper, congratulated the company on its work over the years. He used the opportunity to inform that Pepperpot Magazine is usually featured in Sunday’s announcement, his favorite part of the newspaper.

“I really enjoy reading about the different villages that the newspaper covers on Sundays. It has become the norm for me to clean up on Sundays, relax and then move on to read the paper’s Pepperpot Magazine, ”said Sobers. He described the promotion as an incredible venture.
Sarojanie Persaud, who won the trip for two, said she was delighted to receive her award. The team praised GNNL for the quality content they have been producing over the years.