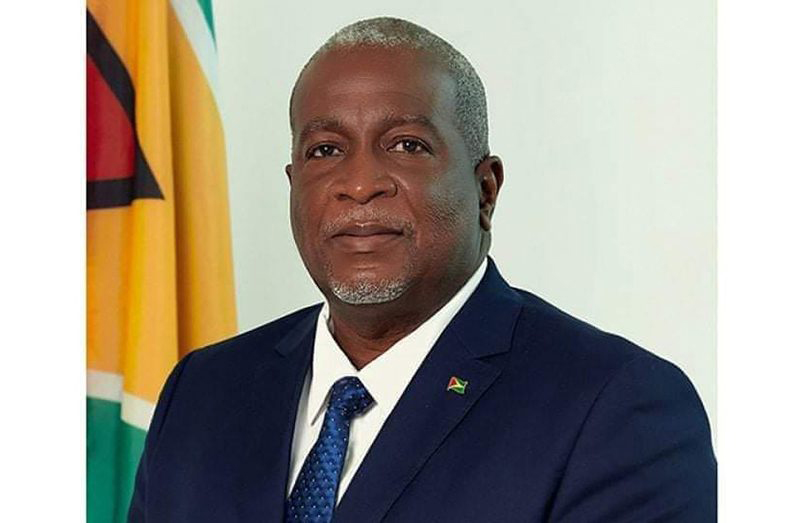 – 1,500 house lots for distribution in a two-day house drive in Leonora

OVER $ 15 billion has been set aside for infrastructure development nationwide, said Prime Minister Mark Phillips as he noted that significant investments have been made in the housing sector in the past few months.
These are aimed at connecting new ways to modern housing schemes aimed at improving the lives of citizens.
The Prime Minister, at the time, was delivering the feature speech at the Government’s ‘Dream Realized Housing Drive 2020’ held on Tuesday at the National Track and Field Center, Leonora, West Coast Demerara, Region Three.

A total of 1,500 housing lots are expected to be delivered at the two-day event hosted by the Ministry of Housing and Water, the Housing and Central Planning Authority.
“Although our Government will continue to make these investments, it is clear to us that the housing sector has the potential to drive our country’s economy and that there are reaping benefits. For example, the opening of new schemes in the different administrative regions will see a boom in the construction sector, which will translate into business for suppliers and job creation for skilled workers, ”explained the First Minister.

He said the Government’s strategic plan will include engaging with the private sector to work forward to realize the vision for the housing sector.
“It is important that we partner with the private sector so that we can deliver what we envisage quickly for the benefit of Guyanese. It requires us all to play our part in building our nation and it is simply impossible to get to where we want to be without concerted effort, ”he added.
Standing in on behalf of the President, Dr. Mohamed Irfaan Ali, the Prime Minister said the occasion was especially dear to the President as he was in his hometown.

The Government is happy and passionate about the development and progress of all Guyanese.
“Many of you have waited a very long time for this day and I would like to congratulate all of you who will be getting many houses today, as this marks the beginning of a new chapter in much of your lives as you work towards construction your future for yourself and your families, ”said the First Minister.

AFFORDABLE HOUSING
Noting that providing affordable housing is high on the Government’s agenda, the First Minister said that all the infrastructure needed for citizens to live comfortably will be provided and this includes running water, roads and electricity.
“Just over two months ago, our Government reversed the VAT on building materials, so that alone has reduced the cost of construction by a significant percentage and will allow you to build your homes at cost lower than before, ”he added, adding:“ We also increased the Mortgage Interest Relief ceiling to $ 30M, so those of you applying for loans to build it will no longer face the burden of interest large for up to $ 30M. This measure passed in Parliament by our

The Government back in October has been warmly welcomed by everyone, as well as young, first-time homeowners who are now eager and positive about their future. ”
This means, he said, more money is available to build decent, high quality homes at an affordable cost.
“Therefore, we are only coming to you promising affordable housing without a plan for you to secure affordable housing. We have already implemented measures from the time we took office to pave the way for providing you with affordable housing, ”the First Minister stressed.
He underlined that plans for the Housing sector had already begun to be introduced with the distribution of thousands of land titles and the allocation of housing lots across the country.

“You would have found that the ministers have been very active and making themselves available to you to address your concerns and needs. We’ve been coming back to your communities the same way we campaigned because it’s the only way we can deliver effectively for you and really understand what your needs are, ”the First Minister noted.
Shaneeza Yacoob, 25, from Uitvlugt, West Coast Demerara, who filed an application, years ago, was among the first group of people to receive her land from the Prime Minister. “I think this is a good venture and I’m very happy to own my own home, soon I’ll start building,” he said.

ECSTATIC
Another recipient, Dorcel Farley of Bagotville, was also highly praised.
“I feel ecstatic about it, ever since I got the call, I couldn’t stop smiling and rejoicing with my family. This is a great step for me, I think it’s a step in the right direction, because my dream has always been to have my own property. ”
Patsy Singh, 64, a mother of six, who had been waiting more than 25 years for a plot of land, was also happy to have received a lot in Cornelia Ida, West Coast Demerara.
Meanwhile, Minister for Housing and Water, Collin Croal said the Government is committed to providing housing solutions to all citizens even as the country tackles a global pandemic and other challenges in 2020 .

“We continue to be spontaneous in our decision to ensure that this land owned by us all provides homes for all of us. I know how important it is to have your own home; this pandemic has made us reconsider the need for adequate family accommodation and the changing approaches to education are also forcing children to think about the needs of children for a place, ”said the Croatian Minister.
He explained that adequate and affordable housing was a challenge but the Government was committed to making home ownership affordable.
“When our Government invests in the housing sector, there is a direct positive impact on job creation in the construction sector, increased spending and increased demand for basic goods and services. All of this leads to good things for small and medium-sized businesses, truckers, taxi drivers, bus operators, carpenters, painters and many others, ”said the Housing Minister.

With around 1,500 new housing lots, he said this can only contribute directly to improved well-being and quality of life, as the Government sets the stage for a socio-economic campaign that will increase wealth among Guyanese, starting with helping them get their own homes.
“There are many decisions ahead that you will have to make, from deciding on the size and style of your house to the type of materials you will use. I would like to remind you to use sustainable materials as much as possible, consider creating green spaces for you and your families to enjoy and importantly the changing needs of your loved ones. And while you are making those decisions, you know that your Government will stand with you to ensure that this process brings you joy rather than frustrations, ”the Croatian Minister explained.

SIGNIFICANT WORK
In just five short months since the Government came to power, Minister Croal said more than $ 3 billion had been allocated in the national budget to improve infrastructure in new and existing housing areas and to acquire lands for people to build their own housing.
He added that more than $ 5.1 billion will be invested here in Region Three for infrastructure work in the coming year.
“We have increased the Mortgage Interest Relief limit for low- and middle-income homeowners and low-income loans, and eliminated VAT on building materials; this makes building materials more affordable. As we have committed, we will continue to engage with our private sector partners to ensure that prices are kept competitive and that materials are always available, ”reminded Lenora.

Ministry of Housing and Water Minister Susan Rodrigues said the home ownership policy will guide the ministry over the next five years.
“It’s not allotment of land, but home ownership, promoting families, promoting community life and building sustainable communities. This is our vision for the next five years. As development comes to our country, we want it to touch all Guyanese across the country, ”said Minister Rodrigues.
He also said that the Government’s aim is to ensure that no one is left behind irrespective of race, class, religion, political affiliation or current location.
CHPA CEO Sherwyn Greaves also attended the event.
The Government intends to create sustainable housing and has pledged to deliver at least 50,000 homes within its first term of office.
Idea of ​​President, Dr. Mohamed Irfaan Ali, is the ‘Dream Realized’ housing campaign. About 3,500 housing lots have already been distributed under this program.