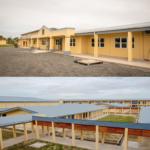 15 months after the original deadline…

The view from the dance studio

Kaieteur News – The $ 1B Westminster High School in Harmony La Parfaite, Region Three (Essequibo-West Demerara Islands) is finally complete, though 15 months after the original deadline.
Yesterday the Ministry of Education revealed through a press release, in which it was stated that Education Minister Priya Manickchand had visited the “state of the art facility” and declared it ready for the new school year, which begins in September.
The construction of the school was covered by the Guyana Secondary Education Improvement Project (GSEIP), funded by the World Bank. The aim of the project was to help achieve General Secondary Education in Guyana to modern standards.
The statement originally stated that the PPP administration in 2013 had planned for six schools to be built under the GSEIP project, but reduced the number to three. The three schools to be built were Westminster High School, Good Hope High School and Prospect High School.
The contract for the construction of Westminster High School was awarded to R. Bassoo and Sons Construction in October 2018, and began the same month with a deadline of January 2020. However, the deadline was not met and after taking up the post in in August 2020, Manickchand warned contractors of the government’s zero-tolerance policy for delays in work, and charged them to deliver the work within the contractual time.
The Ministry’s statement noted that it had been working closely with R. Bassoo and Sons Construction Inc., and the consulting firm Deen and Partners / SRKN Engineering to ensure the completion of the school.
Furthermore, he noted that all necessary furniture and equipment had already been purchased and would be installed as soon as the building was handed over to the Ministry. That transition process is slated for next week. The Education Minister has also confirmed that the school will be staffed with qualified graduate teachers and other relevant staff.
It will accommodate 1,000 students and will therefore be a Grade A school, according to the Minister, but for the time being, it will be categorized as Grade B. The Grade B status is expected to change to Grade A over the next two years. It was also revealed that the Ministry is planning to upgrade a Sixth Form school to the school to offer students the opportunity to sit the Advanced Caribbean Proficiency Exam (CAPE).
The newly built school has 32 classrooms, a language lab, dance studio, library, Physics, Chemistry and Biology labs, Information Technology Lab, theater room, Maths lab, Home Economics Lab and Agriculture Science Lab, among others. important facilities.
An update was also given on Good Hope High School, which is also late for completion, and Manickchand was said to be hopeful that he may also be ready for September to serve District Four students.