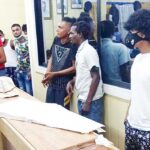 21 arrested for disregard of COVID-19 guidelines

Kaieteur News – Twenty-one people were arrested over the weekend demonstrating blatant disregard in the COVID-19 guidelines calling on citizens to respect the 10; Curfew 30pm, wear masks and practice social isolation.

Some of the people arrested by the Joint Police.

The individuals were arrested by members of the Joint Services.
This recent arrest follows those made during the Easter weekend. Kaieteur News reported last Tuesday that more than 100 people had been arrested by ranks attached to Joint Services for violating the COVID-19 Guidelines in Georgetown.
This weekend the COVID-19 patrol went to areas in Region Three and Mabaruma, Region One.
According to a police report, operations were carried out in Mabaruma between 19:30 o’clock. and 22:30 o’clock. on Saturday.
Within that time, the ranks stationed there patrolled Kumaka Waterfront, Hosororo Hill and Mabaruma Township. Those ranks reportedly observed 12 people breaking the guidelines and arresting them. Police detailed out of 12 arrested; eight were fewer masks while the other four failed to practice social distance.
Meanwhile, during Joint Services patrol operations in Region Three, nine other people were arrested between 22:40 o’clock. on Saturdays and 00: 40hrs. on Sundays.
Division Three Commander, Superintendent Errol Watts, said the nine arrested at the time were drinking alcohol in front of a popular beer garden on Vergenoegen’s public road, East Bank Essequibo.
Watts added, these exercises will continue as part of a dedicated effort to ensure that security protocols are adhered to and that curfews are not violated.
The National Task Force COVID-19 (NCTF) is the body behind ensuring that the COVID-19 guidelines are respected. Its partnership with the Disciplined Forces to achieve this is proving to be a great success. The campaign to keep citizens in mind is called “COVI-CURB.”