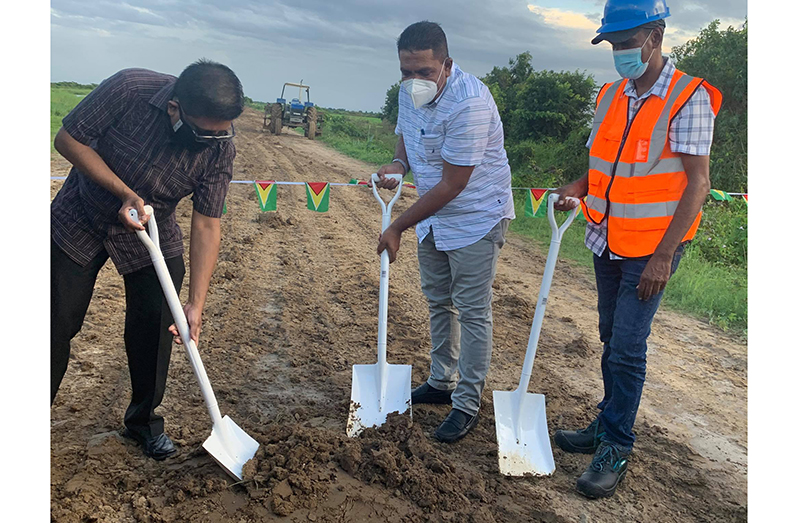 THE turf has been officially turned over for the construction of a five-kilometer asphalt farm-to-market road at Onverwagt, West Coast Berbice, which is expected to benefit hundreds of farmers. With the construction of the $ 327 million road, over 30,000 acres of rice are also expected to be cultivated, while 60 cattle farmers with a total of 23,000 head of cattle, and about 1,000 small ruminants will also benefit ‘ directly. Minister of Agriculture Zulfikar Mustapha and Senior Minister in the Office of the President with responsibility for Finance, Dr. Ashni Singh, was present to turn the turf in the presence of farmers and regional officials to officially launch the project on Saturday.

The contract was awarded to West Berbice’s contractor, Romell Jagroop Construction Company, and is due to be completed in eight months. Once completed, farmers will be able to access their farmland all year round, and can expect lower production costs; lower maintenance costs for machinery; timely and improved crop management and increased productivity, yield and profit. Minister Mustapha in his address, said the road was a realization of the People’s / Civic Progressive Party (PPP / C) manifesto pledge to restore budgetary support for the provision and maintenance of drainage and irrigation systems, and farm-to-market roads adequate. He revealed that six similar roads will be built nationwide; three will be in Region Five (Mahaica-Berbice). Highlighting the importance of agriculture, the minister highlighted that it is one of the most important sectors in the country and that if properly developed, it will create jobs and wealth, but more importantly, food security.

“We believe that infrastructure investment is needed to make the agriculture sector viable and sustainable. Without key investments in infrastructure service, the service will not be delivered. If you want to improve productivity and productivity, then as a government we have to put in place the necessary infrastructure to make sure we support the farmers so they can produce, expand. [and] their output in the agricultural sector. We have been focusing mainly on expanding and strengthening the drainage and irrigation system, ”said the Agriculture Minister.
According to him, since taking up his post in August 2020, the Ministry of Agriculture has overturned land rental and drainage and irrigation fees for Mahaica farmers, Mahaicony Abary (MMA); land rental fees were reduced to $ 3,500 from $ 15,000 and about 245 canals have been de-silted and dam-rated.

In addition, MMA-ADA was allocated $ 98M to make urgent repairs to drainage, infrastructure and dams, benefiting 96,000 acres of farmland and over 2,300 farmers and their families in Abary Berbice and the Mahaica-Mahaicony block, while that urgent works be undertaken at the MMA-ADA, including the cleaning of several canals at a cost of $ 28.9M.
In the meantime, Dr. Singh in his remarks that Guyana is at an incredibly exciting time in its history with oil production. Dr. noted that Singh said that the government intends to use the revenue derived from oil to boost other sectors, especially the agricultural sector, which have been the backbone of the economy.

“Oil will be important, but I want to tell you categorically that the President’s agenda and the mandate he has given to ministers is that we must ensure that every other productive sector of the economy realizes a dramatic transformation and fast, so that we see a boom in our economy. Our intention is that Guyana must take its rightful place as an agricultural powerhouse in this Region. Not only must we be famous for oil and gas, we must also be known for the fact that we are finally realizing our talked-about potential [of] for generations; we are finally realizing our potential to be the Caribbean bread basket and the main supply of food products throughout the hemisphere. “

GAS-TO-SHOW PROJECT
Meanwhile, Minister Singh reiterated that the government is deliberately pursuing the onshore gas project, as it is key in reducing energy costs, which will ultimately reduce production costs and open up new routes for investment and wealth for Guyanese, especially farmers.
He explained that Guyana has long been an exporter of primary agricultural products, bulk sugar, rice, harvested fruits, vegetables and non-traditional crops, but one of the main obstacles that prevented Guyana from moving to agro-value added processing, has been the cost of energy; the onshore gas project will facilitate this.
“… So as you read about onshore gas, gas to power and you read about the energy cost reduction, you may be tempted to make the mistake [that] this does not apply to agriculture, but it is particularly relevant to agriculture because when the cost of energy comes down, immediately, our ability to process refined products, to package products to develop added value and to promote agro-processing … immediately our ability. doing so, and doing so competitively, is easily transformed.

“So we have an integrated plan that is literally starting to make acreage available, opening up lands. This road alone will improve access to 12,000 acres. ”
Meanwhile, farmers praised ministers and the government for listening to their call, noting that they had asked for the road years ago.
Rice and cattle farmer Ashiek Motilall told the Guyana Chronicle that he uses the Onverwagt road to access his farmland and during the rainy season, it is challenging and very expensive to do so.
“Restoring the road will be very good for me and many farmers, because we can get to work faster. I will no longer have to use two tractors to accompany one vehicle and then branch off. At the moment, the dam is so bad, we can’t go with a loaded trailer, because we get stuck. “