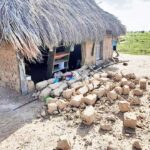 Some of the affected properties in Lethem. (Source: Karlos Kroft)

Kaieteur News – A magnitude 5.7 earthquake struck yesterday afternoon near Boa Vista, Roraima, Brazil.
Following the earthquake, the Civil Defense Commission (CDC) said through the National Emergency Monitoring System (NEMS) that it was monitoring activities at Lethem, which felt trembling.
Head of the CDC, Colonel Kester Craig, said in a Facebook Post that the agency had received reports of a 10-kilometer shallow earthquake with an epicenter near Boa Vista.
Craig said shallow earthquakes are felt stronger than deeper ones as they are closer to the earth’s surface. He noted that the exact magnitude, epicenter and depth of the earthquake will be reviewed and updates will be provided as information becomes available.
In addition, the Regional Emergency Operations Center reported that the tremor was felt in Upper Takatu-Upper Essequibo, Region Nine. The Upper Takutu-Upper Esequibo Regional Authorities confirmed that some properties and ground surfaces in the community of Katoonarib, Deep South, Rupununi, were damaged.
Since then, the Regional Response System has been used and is ready to conduct assessments and support for affected families.
Reports from the Unites States Geological Survey (USGS) indicated that the earthquake was at a depth of 9.7 kilometers and 83 kilometers from Lethem.