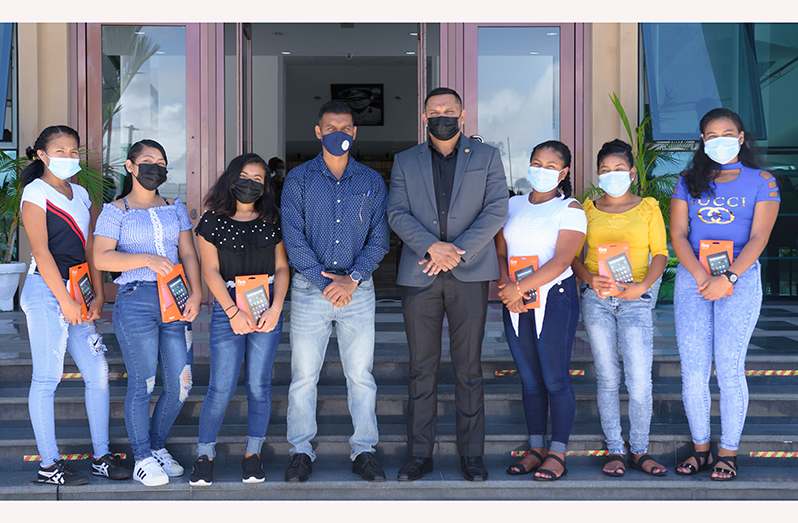 By Mesha Sealey
THE Ministry of Natural Resources has selected 50 people from across Guyana to participate in this year’s Youth in Natural Resources (YNR) apprenticeship programs.
The participants selected were officially inducted during a simple ceremony at the Arthur Chung Conference Center, on Saturday.
While 50 people were set up, the Guyana Chronicle understands that apprentices will be divided into two groups of 25.
The YNR program is an opportunity for young people to experience the inner regions of Guyana, learn about the natural resources sector, and access employment opportunities in the sectors.

During his charge to the apprentices, the Minister for Natural Resources, Vickram Bharrat, highlighted the importance of natural resources to the country’s economy. It took time to outline the cost of electricity, the gains from gold mining, and the indirect and direct jobs offered in the sector.

“The Ministry of Natural Resources, and the mining sector, is the sector that has been driving our country over the past few years, because we have seen the decline in all other sectors, especially construction, agriculture, the bauxite industry. , and many other industries would have seen a decline.
“But mining, especially gold mining, would have kept our economy going. You may not know – or some of you probably know – that about 2,000 Guyanese depend on gold mining directly or indirectly; whether they work in mining operations, whether they are miners, or suppliers to the mining camps and miners. But mining, gold mining, is currently making a significant contribution to our economy, ”Minister Bharrat reasoned.

Furthermore, the minister said that one of the aims of the YNR is to engage the natural resources sector at an early age, as this particular sector does not engage the public.
While Guyanese are paying more attention to the country’s natural resources because of Guyana’s petroleum sector, the minister said there is not enough interest in the sector among the youth population.

He believes more youth should be advised to join the science and technical streams, so that they can be better placed to manage Guyana’s natural resources.
“The Youth in Natural Resources program is really about getting interested in natural resources at an early age, because of what we would have discovered over the years, and being a teacher myself, for a number of years, I would have discovered that many o young people – the majority of young people – do not get into science or technical flow in secondary school, ”said Minister Bharrat.

The minister said that many students are grabbing into other fields of study because of the common perception that business, and the ‘arts’ are easier to exceed than technical and science subjects.
“You want to pass a lot of topics. You say, ‘I don’t want to get into science because science is difficult’. Because you’ve been told that, or you’ve heard someone say, ‘Physics is difficult. Chemistry is hard. Biology is difficult. ‘So you’re doing business, accounts, EDPM, HSB, because that’s easier … I don’t think those subjects are difficult; I think we, as young people, put a block of thought against these topics, ”opined Minister Bharrat, speaking about his experience in the teaching profession.

He encouraged students to take a more determined approach to difficult subjects, and encouraged them to challenge themselves to try out areas that might seem daunting to them.
“It may be difficult for you, but it’s not for me. That is the kind of attitude that we need to recommend. When you hear someone say that, you should say, ‘you may find it difficult. Maybe it’s not difficult for me. Let me try it and see for myself ‘, instead of believing people and setting your mind against it, ”the minister asked.

He expressed his hope that the YNR program can help students not only unlock new potential and hidden talents, but also to be adequately guided towards fulfilling their purpose, thereby making a contribution to the country.

In the YNR apprenticeship program, participants will travel through Guyana’s dense rainforest to mining camps in Regions Two and Seven, see for themselves how precious and semi-precious minerals are extracted from the earth, and interact with mentors and professionals who will share their knowledge and experiences of working in extractive industries, including in the oil and gas sector.

Youth participants will be able to establish corporate links through networking with businesses in the sector and being registered as youth ambassadors for natural resources. They will also have the opportunity to participate in the annual Guyana Geology and Mines Commission (GGMC) activities week focused on the mining sector.
The minister assured participants that strict COVID-19 guidelines would be enforced at all stages of the program. To this end, digital tablets were distributed to participants to avoid constant physical contact.