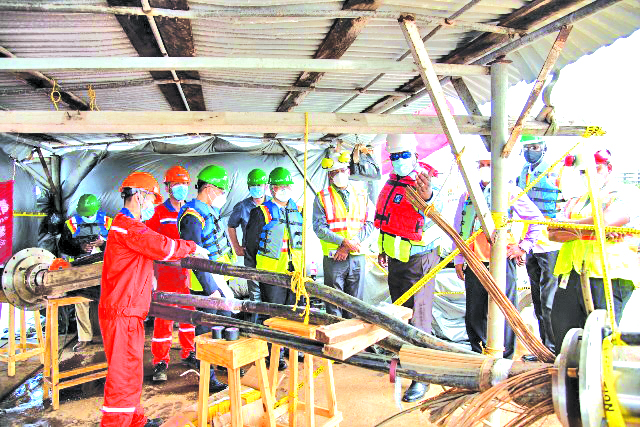 Brigadier Prime Minister (ret’d) Mark Phillips examined the repairs made to the recently damaged 69kV Guyana Power and Light (GPL) submarine cable on Tuesday and is satisfied that there will be fixed power for the holidays.

The 69kV submarine cable connects Vreed-en-Hoop and Kingston GPL substations and allows for the transfer of electrical power to the Demerara-Berbice Interconnected System (DBIS).
Prime Minister Phillips noted that the repairs to the damaged cable had been completed and would be tested on Tuesday night.
“We will test the cable tonight (Tuesday), in tomorrow (Wednesday) and based on what I am told, by Wednesday night, it should be up and running and we will be able to get the balance of the (electrical) load of Vreed-en-Hoop to the rest of the Demerara-Berbice Interconnected System. “
The First Minister expressed his gratitude to the Chinese Ambassador for bringing a team of four Chinese engineers to Guyana, to assist with the repairs.
Ambassador Jianchun said he was happy to assist. He added that China and Guyana share excellent working relationships and that support is expected when needed.
“We always say that China and Guyana share a strong relationship and we are good friends… This is not about the money; this is really about needs and I commend the Government for being a people-centered Government, ”said the Ambassador.
Minister Indar highlighted that the cable was severely damaged and the Government will seek to recover the costs incurred on the repairs. He said the cost had already been estimated at around US $ 500,000.
“It’s not a plug and a play, it’s a serious job that required logistics … We’re going to chase back the ship owners, the insurance and the agents, for every single dollar we spent. This was not our fault. ”
The Minister added that the Maritime Administration Department (MARAD) had already issued instructions to maritime operators that Area B (the area where the cable is located), is now a restricted zone and operators have been prohibited from mooring their ships there.
“Because the cable is damaged four times, every time it gets cut it gets shorter … ships can’t anchor there, we have to monitor that,” said Minister Indar.
The 69kV submarine cable was damaged in late November after being hit by a ship anchor in the Demerara River.