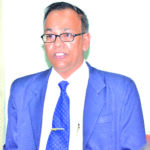 $ 864M in payment vouchers not presented for audit – RE Report

Kaieteur News – According to the 2019 Auditor General’s report, 744 payment vouchers totaling some $ 864.41 million were not submitted to his office for audit resulting in the audit scope being limited.
The defaulted entities are the Presidency Ministry, the Ministry of Public Security and the Guyana Defense Force (GDF). The report highlighted that there were 304 payment vouchers totaling $ 259.472 million in respect of the above entities while 436 vouchers had a value of $ 576.168 million in respect of several regions.
Included in the amounts for the Regions were 426 payment vouchers worth $ 545.276 million for Region Five, representing approximately 95 percent of the total value of unrepresented vouchers for the Regions.
“As a result, it was not possible to ascertain whether value had been received for the sums involved, and whether the funds were used for their intended purposes,” said Auditor General (AG) Deodat Sharma in his report.
Checks on hand
In addition, the AG noted that at the time of the audit, checks were still on hand on a number of Ministries, Departments, and Regions which should have been repaid to the Consolidated Fund as of December 31, 2019 with the necessary adjustments are made to the Appropriation Accounts.
In this regard, it revealed that 588 checks totaling $ 713.942 million were still on hand.
Of this concentration, 273 were checks worth $ 569.686 million in respect of Ministries and Departments, while the remaining 315, totaling $ 144.256 million, were in respect of Region Two and Four to Nine.
As a result of this, the Appropriation Accounts were overstated by $ 713.942 million, Sharma highlighted.
Economic Fund / Economic Project
It was also noted that in the report for Economic Projects, the AG noted that Regions Two and Six were operating on a cost recovery basis with the aim of profit.
However, these initiatives were inadequately managed and supervised.
Region Two had three advances totaling $ 194,000 unpaid, while Region Six lost $ 7.510 million and did not submit payment records to confirm the $ 3.396 million expenditure.
Most notably, however, it identified Region Five that operated a farm to provide agro-supplies to schools and hospitals and offer employment to people in the Region.
This farm planted and sold cash crops. However, records to confirm the operations of this venture revealed that sums totaling $ 92.480 million were invested for the years 2016-2019, while only $ 165,000 was realized as profit for the year 2019.