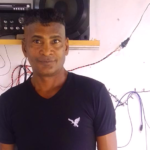 Kaieteur News – A 45-year-old fisherman is feared to be drowned after the fishing net, which threw the sea into his feet and pulled him overboard in Waini River Mouth, Northwest Region.
According to police, Vickram Hardowar also called ‘Ramo’ from Uitvlugt Village, West Coast Demerara (WCD), allegedly collapsed sometime around 04:30 am on Monday, while he was accompanied by six other members of the crew.
Kaieteur News learned that Hardowar and his crew would usually head out to the Region One area to fish. It was reported that on the day of the incident, one’s father was seen tossing the fishing seine in the sea about 65 miles offshore when his feet touched the seine. As a result, the fisherman lost balance and fell overboard.
One of his crew members, who witnessed what had happened, told investigators he threw two lifejackets in the direction of Hardowar and was in the process of turning around the boat, when he heard him shouting for help three times. The man reported that after the 45-year-old called for help; he did not hear after that. After learning what happened, the fishermen began to search the area but came out empty-handed. Upon returning to shore, a report was made to Morawhanna Police Station. Based on information received, the men are currently at the Mabaruma Police Station assisting with the investigations.
Yesterday when Kaieteur News contacted the man’s family, his sister Dolly Hardowar contacted him on Monday around 15:00 hours, received a call from her brother’s boss, who informed her of the incident and that Hardowar has not been seen since. After hearing the news of her brother, she and her relatives went and made a report to the police. According to Dolly, her brother who usually lives with her left home a week ago to go to the area. He said he would usually spend two weeks at sea before returning home. She contacted that since he left, she hasn’t contacted him because he doesn’t have a phone. Meanwhile, an investigation into the incident is ongoing.