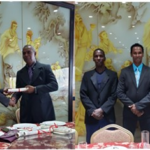 Kaieteur News – On March 29, 2021, Shihan Nowieldath Khedoe of Suriname was again under the watchful eye of panel five (5) led by President of Guyana Hanshi / Soke International Kyokushinkai Martial Arts Academy, A. Nazim Yassim and President of the International Guyana Martial Arts Association and ‘ r Grandmaster / Professor Christopher Norville.
Shihan Khedoe was currently undergoing an examination to establish his own martial arts system “SHURIKEN-RYU” which uses techniques from the kyokushin karate and other martial arts systems he has learned over the last 30 years or more. And so he has fulfilled all the Physical and Mental requirements; gained the technical knowledge in this art and excelled in these special skills. He has acted with Honor, Respect, Self-Confidence and Discipline.
Shihan Khedoe, with age, experience and knowledge on his side, showed his skills well enough to get the green light for his system, and so he has done it again, this time with the 10th Under black belt international rank and ‘ r title of Hanshi.
Shihan Khedoe now Hanshi Khedoe marched his way into history as he stepped out to continue building his “SHURIKEN-RUY” martial arts system recognized by the Kyanaushinkai Guyana International Martial Arts Academy and the International Martial Arts Masters Association Guyana.