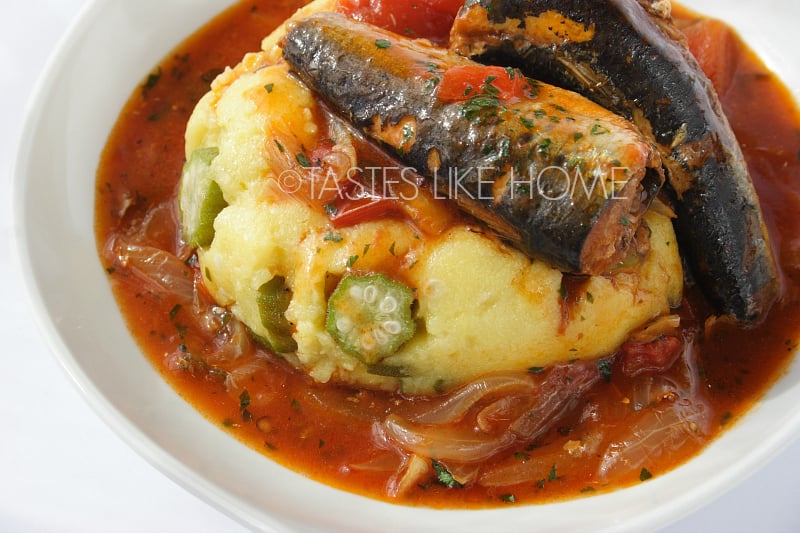 Caribbean cuisine is a creative blend of cuisines from around the world. However, as we prepare to celebrate Enfranchisement Day this is an ideal time to think about how our food is related to the foods of the African continent.

I emphasize the Africans continent, because there are still many people who seem to speak and write as if Africa were one country. Africa is a vast continent of 47 countries (53 if the nations of the islands of Madagascar, Comoros, Seychelles, Cape Verde Islands, São Tomé & Principe, and Mauritius are included). And in each of these countries there are many different people. This means we could get into the habit of thinking about Africans usefully influences rather than a single, unified, African influence.

African influences in the Caribbean are often assumed to be only of West African origin. We trace our heritage to the enslaved Africans forced to travel the horrific Middle Pass from the West African Coast to the Caribbean. However, many scholars suggest that Africans from different parts of the continent were brought to the slave ports on the West Coast before being sold into slavery. So it seems likely that while the influence of West Africa is very strong, we can, in fact, trace our food and cultural heritage to different locations in Africa.

So what are some of the ingredients and dishes we use and make today that we can highlight as African in origin or influence?

Tamarind, watermelon, sorrel (roselle), tomatoes, hot peppers, and pigeon peas are among the widely used ingredients in African cuisine that we have incorporated in many ways into our fused food. In Ghana, they also make plantain chips and in Nigeria, they make mature ripe plantain just like us; they call it dodo ikrie. In Kenya, the type of pumpkin they use is the same as we do in the Caribbean; in Kenya and North America known as calabaza. The Kenyans also make a similar dish of fried pumpkin just like us but their cooking technique is slightly different. First, they par-cook the chopped pieces of pumpkin and then add them to fried onions. The pumpkin is then cooked until it caramelizes and changes color, becoming a brown rust color. I smiled when reading that they sometimes added a pinch of sugar to their fried pumpkin because that’s exactly what I grew up seeing my mother do whenever she cooked a pumpkin.

In Sudan, they also make a similar version of stewed liver. They eat them over a bed of fungus / mushroom fungi similar to Bajan cou-cou or fungus / fungi Antigua and Barbuda. In Niger, the dish making called tuo (turn cornmeal, aka cornmeal cou-cou).

As we made foo-foo, with several ground provisions, the original foo-foo was made with yams only. This is another case of our improvised and innovative work as we use plantain, eodoes, cassava and tannoy to make foo-foo.

In some ways, Nigerian fish cake is similar to Guyanese fish cake – they also use fresh fish in their fish cakes, however, instead of adding mashed potatoes, they use mash jams (I know we we use them sometimes). We shape ours the way the Portuguese do and in the case of the Portuguese, salty fish are used to make their fish cakes.

I was excited to hear that they are also making lemongrass tea in Côte D’Ivoire and Ghana! And they use it in the same way as French tisane (herbal tea). Many years ago when I made lemongrass tea for the first time and posted it on my blog several friends from China and Indonesia were fascinated by the use of lemongrass to make tea; their experience was just using herbs as culinary herbs.

I have written in the past about black eye peas and their influence on our food; use these peas / beans in the cooking rice that we make not only at weekends, but especially on the last night of every year. In cooking this dish, we call upon the habits of the Africans who came before us and who passed a tradition of cooking a certain dish and guiding in a New Year hopeful of luck and good fortune.

Enfranchisement Day is a great opportunity for us to celebrate our African heritage. Events will take place up and down Guyana that remind us of our rich African culture. Get out and enjoy them, no matter where your own ancestors came from. And yet, let us also note that, on a daily basis, the dishes on our stoves are a testament to our ancestors, to their survival spirit, to their creativity, and to their commitment to survival and prosperity – no matter how hard it is the circumstances. Let’s live up to their example.