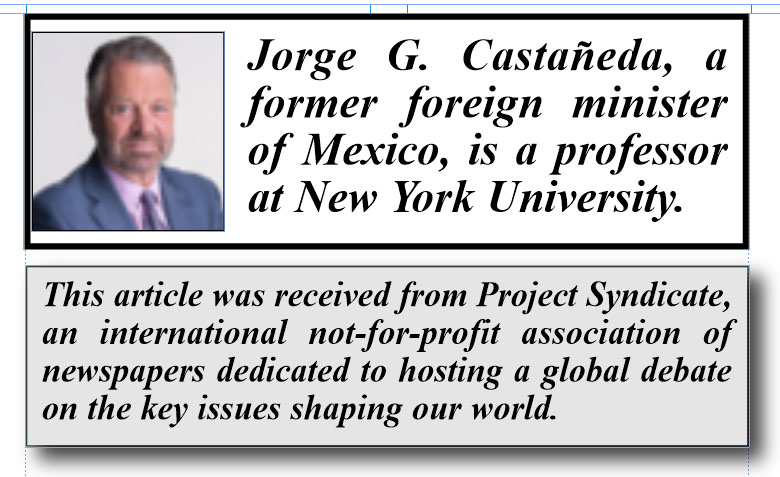 MEXICO CITY – US President-elect Joe Biden made a “return to normalcy” in one of the leitmotifs of his election campaign. After four years of President Donald Trump’s bare-faced lies, youthful bullying, relentless cruelty, and dangerous volatility, it was certainly an appealing promise. But, as Biden himself has admitted, the world is not what it was in January 2017, when the Barack Obama administration – where Biden served as vice president – left office. So what exactly does he intend to return?

To be sure, Biden can certainly restore a sense of decor and decency to the US presidency. But on tangible policy issues – especially foreign policy issues – the status quo ante will be much harder, if not impossible, to revive.

Biden has vowed to reintroduce some of the Obama-backed international agreements of Trump, starting with the Paris climate agreement and Joint Comprehensive Plan of Action (JCPOA, better known as the Iran nuclear deal). In addition, it plans to extend the 2010 New Strategic Weapons Reduction Agreement (New START) with Russia, rejoin the World Health Organization, and re-engage with Cuba. He may also join the successor to the Trans-Pacific Partnership (TPP), the mega-regional trade deal that Obama negotiated and Trump rejected.

Re-entering into the Paris agreement should be the simplest of these actions. It never got treaty status, mainly because Obama knew that the Republican-controlled Senate would never approve it. That’s why Trump managed to withdraw from it without a congressional vote; it simply had to adhere to the one-year waiting period stated in the text. Similarly, Biden could rejoin without congressional approval, after only a 30-day waiting period.

However, the rest of these efforts will be fraught with difficulties. The JCPOA is a case in point. Although not also ratified by the Senate, unilaterally lifting economic sanctions on Iran (mostly on oil sales) would create furor among congressional Republicans, for whom Biden needs to fulfill other promises. Israel, too, would be incense. The move may even raise a few eyebrows in Europe.

Critics argue that the JCPOA places inadequate restrictions on Iran’s nuclear-enrichment capabilities, leaving out critical issues – namely, Iranian ballistic missiles and, more importantly, its support for the region’s anti-Israel, anti-American forces (such as Hezbollah) or regimes (such as in Syria). Without some changes, the agreement will most likely remain unhealthy.

Any attempt to restore Obama’s normalization policy with Cuba will face similar challenges. This approach implies a fully-staffed US embassy in Havana, no travel or payment restrictions, and the resurgence of cruise ship visits and airline connections to the island. It would also mean as much investment and trade as possible under the US embargo that has been in operation since 1961 (which will not be picked up by the Biden administration).

Biden probably wouldn’t ask Cuba for anything in return. After all, Obama reached a deal with the Castro regime in 2015 simply because it contained no explicit conditions concerning human rights, democracy, economic reform, or substantial Cuban cooperation in Latin America.

But, as the last five years have shown, Cuba will not tackle these issues on its own. In a recent interview, former US Secretary of State John Kerry, speaking on behalf of Biden, admitted that Cuba’s progress on human rights and economic reform since 2015 has been “disappointing.” In fact, human rights conditions have deteriorated and the number of political prisoners has increased. Meanwhile, the humanitarian crisis in Venezuela, where Cuba exerts enormous influence, has worsened significantly, with no resolution in sight.

Against this backdrop, trying to normalize relations with Cuba would be politically risky. In the election, Biden performed significantly worse among Cuban-Americans in Miami, which accounts for more than 10% of Florida’s voting population, than Hillary Clinton did in 2016. Furthermore, Biden may need the support of Florida Republicans , like Senator Marco Rubio, to fulfill his promise of creating a path to citizenship for 11-12 million undocumented immigrants.

Moreover, while Biden has not made any promises regarding Venezuela, he will have to make several crucial decisions in this regard almost immediately after his inauguration. Will it maintain economic sanctions against the country and its state-run oil company, Petróleos de Venezuela, SA? Will he recognize Juan Guaidó, the leader of the opposition who sworn in as acting president in 2019, as the country’s legitimate head of state? Will it override the results of the National Assembly’s farcical elections held on December 6?

In other words, will Biden generally support Trump’s Venezuela policy (except for the hare-coup plans hailed by American and local cowboys)? Or will he seek another way to address the country’s serious humanitarian crisis? Returning to Obama’s policy of “benign negligence” – a reasonable position at the time – would be problematic today.

Finally, there is the question of Asia-Pacific trade. Biden has not pledged to join the TPP’s successor, the Comprehensive and Progressive Agreement for the Trans-Pacific Partnership (CPTPP), created after Trump’s withdrawal from the 11 countries that negotiated the original agreement with Obama. Nor has it announced plans for renegotiation.

Biden, however, has said he believes the TPP was not a bad deal for the United States, though it could require further labor and environmental provisions. If he wants to revive Obama’s “pivot to Asia,” and work with allies to include China in the region, joining the CPTPP would be a good start. But this must be approached less like a return to the past than a step into the future.

Here comes the fundamental challenge for Biden: how to revive useful multilateral treaties or foreign policies, while recognizing the myriad ways in which the world – and America’s reputation – has changed in the past four years. It is not possible to “return” to the past, but only to adapt US objectives and strategies to current conditions. The sooner the Biden foreign policy team recognizes this, the better.