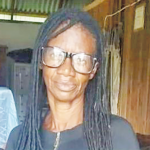 Another to testify is Lry Vryheid’s daughter murder PI

Kaieteur News – One more witness is expected to testify in the murder case of 56-year-old Velma Pickering of Lust Vryheid, East Coast Demerara (ECD), as the Preliminary Investigation (PI) continues in Sparendaam Magistrates’ Court before Magistrate Alisha George. Pickering was allegedly stabbed and killed by her son-in-law in May last year.
The defendant, Linden Isaacs, 28, a security guard, from Strathspey Squad Area, ECD, was not required to plead to the indictable charge, which he claimed, on May 11, in Lot 257 South Vryheid’s Lust, that he murdered Pickering.
When the matter was called on January 18th, 19th and yesterday by Police Prosecutor Vivian Adolph, four witnesses continued their testimony where video evidence and the suspected murder weapon were presented. Those witnesses included one detective, two police officers and one civilian.
According to a Kaieteur News report on the incident, Pickering was allegedly left dead after a domestic dispute with her son-in-law turned violent. A police report reported that Pickering had been assaulted and stabbed multiple times after Isaacs accused her of trying to break up his relationship with her daughter. The woman managed to flee the house and ventured to her neighbor’s yard where she fell.
Pickering was rushed to the Georgetown Public Hospital Corporation (GPHC) and pronounced dead on arrival. Isaacs, meanwhile, was apprehended by people of public spirit shortly after fleeing the scene and handed over to police.
An investigation was launched and he was subsequently charged with murdering his mother-in-law. Isaacs is expected to make his next court appearance on Feb. 11 for the murder of the murder PI.