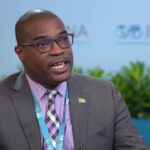 Kaieteur News – Even after being part of the coalition government that signed and failed to renegotiate the prolific Stabroek Block Agreement, the Coalition for Change (AFC) Secretary-General and now Shadow Oil and Gas Minister David Patterson, has reassured her that the opposition coalition will support the People’s Progressive Party / Civic government if they want to renegotiate the ExxonMobil deal.
Patterson made these words during Kaieteur Radio’s program Guyana’s Oil & You on his year-end edition, during which he told the panel of industry experts and listeners, during their five years in government, in holding the power and authority, the first Partnership for National Unity + Alliance for Change (APNU + AFC) has never had a chance to correct the bad provisions in the deal.
Examples of a few of these substandard provisions, structured in such a way that Guyana would suffer significant value spills, include Guyana paying Exxon billions of dollars in taxes; pre-contract cost discrepancies; unspecified interest rates charged to Guyana for loans to the oil entities; weak environmental standards; Guyana’s inability to control oil production; and infrastructure cost discrepancies between Floating Production, Storage and Unloading ships Liza One and Liza.
If the new PPP / C government wants to renegotiate such a deal, Patterson noted, the coalition will offer their “unconditional support”.
Notably, during his time as Leader of the Opposition, now Vice President Bharrat Jagdeo repeatedly crossed the Exxon deal. Even in late December, the VP had disagreed with the fact that some of the wording of the Stabroek Block Production Sharing Agreement (PSA) created the impression that ExxonMobil and its co-contractors had sovereignty over Guyana.
In fact, he said, “I’m having problems with making Exxon seem to have sovereignty within a sovereign nation. I’m having problems with that kind of configuration, ”said the VP,“ and in some parts, the wording of the contract gives or gives that impression that they have sovereignty over the country. ”
But even with these concerning doubts and criticism, the VP and the PPP / C government have refused to renegotiate the contract.